THE TABLE IS SET – A RUGBY SUMMER TO REMEMBER 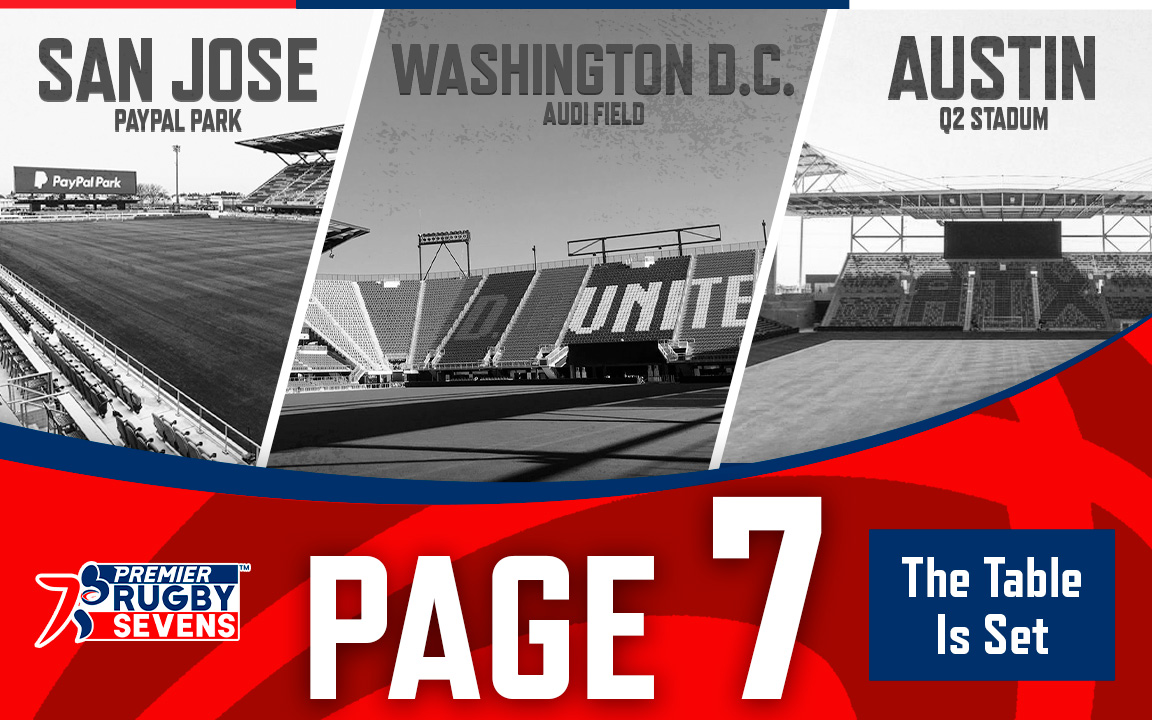 You’ve ordered a delicious meal, and the napkin is neatly splayed on your lap. All that’s left to do now is pretend like you’re not paralyzed with anticipatory excitement, staring at the kitchen door waiting for your server to turn the corner, full tray perched atop their cocked arm.

That’s what it’s like to be a Premier Rugby Sevens fan in the final countdown to the inaugural season kicking off July 9 at PayPal Park in San Jose, Calif., before it heads to Audi Field in D.C. July 16 and climaxes with the Austin Championship at Q2 Stadium July 30. With the recent release of the full rosters, there isn’t much left to do but try not to burst.

The 18-player squads revealed some intriguing new talents set to make their pro debuts in the Bay Area next month, several returning veterans transitioning free-agency-style from one team to another since October’s Inaugural Championship in Memphis, and even a late breaking, very significant transfer.

Olympian Abby Gustaitis spent the Inaugural Championship in Loggerheads kit, serving as off-field captain while nursing a wrist injury. She seemed destined to finally represent the Loggerheads on the pitch this season, until being sent to the Headliners for future considerations.

The transaction gives the Headliners yet another Eagle on top of the USA’s all-time try leader Naya Tapper and the likes of Dana Meschisi, AK Pedraza, Alena Olsen and Rachel Strasdas.

It also opens up roster space for the Loggerheads to add international talent, like a pair of Netherlands 7s stars in Pleuni Kievit and Bowien Jozien Manuhutu. Kievit, first signed to a professional contract by the Dutch Olympic Committee at 17-years-old and captain of the Netherlands, will skipper the Loggerheads.

The Gustaitis transaction underlines a key development in the competition since October, as Rhinos Rugby, a recognized USA Rugby National Development Program, has licensed the Loggerheads franchise for three seasons and is managing the on-field aspects of both men’s and women’s teams, including coach and roster selection.

While the Loggerheads were the only franchise to effectively have their own front office during the team formation process, every other coaching staff effectively selected their own teams. Each was able to tag a PR7s rookie of their own choosing from outside the pool assembled by PR7s general manager Mike Tolkin. Then they were given the chance to retain up to six returning players, and everyone else went into the draft pool, with coaches filling out their rosters round-by-round.

So while the Loggerheads men and women are both loaded with plenty of young talent produced by the Rhinos Rugby age-grade system, it was via the draft process the Loonies ended up with arguably the most coveted Rhinos product, Kahunu Koi. The 18-year-old sensation has developed a reputation as a potential future national team star thanks to his advanced skills, sharp step and blazing speed.

In addition to Kievit and Koi, two PR7s rookies who look poised to make a big impact in their debuts, the Expert men picked up a fresh-but-lethal talent in Nick Feakes. With three 7s national titles and an MVP performance on his collegiate resume from perennial powerhouse Lindenwood, Feakes is one of the best 7s specialists to emerge from the college game in recent years, and he’ll be an instant difference maker for the Experts.

Another recent Lindenwood grad sure to make waves in the women’s competition is New Zealand native and 2022 Prusmack Award Winner Sativa Peehikuru. The Prusmack Award, awarded annually by the United States Rugby Foundation, is effectively college 7s’ version of the Heisman Trophy. Peehikuru led the Lions to back-to-back double national championships in 2021 and 2022, and she’ll factor heavily into the plans of the defending champion Loonies.

One of the best stories in the entire league comes from her college teammate, Caring de Freitas, now an Expert. Growing up in Caracas, Venezuela, De Freitas experienced plenty of trauma in her early life, including her family’s car being stolen and her brother being kidnapped, and she, too, used rugby to escape. At 15-years-old, she was robbed at gunpoint. A year later, she became the youngest player to ever take the field for the Venezuelan National Team. She comes to PR7s by way of Lindenwood University, where she earned All-American honors.

One of the Loonies men also has an inspiring backstory. Rookie prop Monate Akeui is capped for both Kenya’s 7s and 15s sides. The 24-year-old spent much of his early childhood in a refugee camp, his family fleeing from war torn South Sudan, and it was in their new home, Kenya, he discovered rugby. The sport helped keep him on the straight and narrow, and his athletic prowess helped him quickly climb the ranks in one of the best 7s-playing countries in the world.

At 6’3” with serious pace, he is a powerful runner, talented restart specialist and intimidating presence in defense. He’s most recently been playing with Old Blue New York, one of the nation’s top amatuer clubs, alongside returning Loonie Akinola Raymond, who leveraged his performance at the Inaugural Championship in Memphis to earn a call-up to the national team.

With a full season comes expanded rosters for PR7s, and in those extra numbers there is no shortage of storylines or talent. Olympians, national team players from around the globe, college All-Americans and crossover stars alike will be baked into the cake that is the 2022 PR7s season. It looks delicious, and it’s on the way.