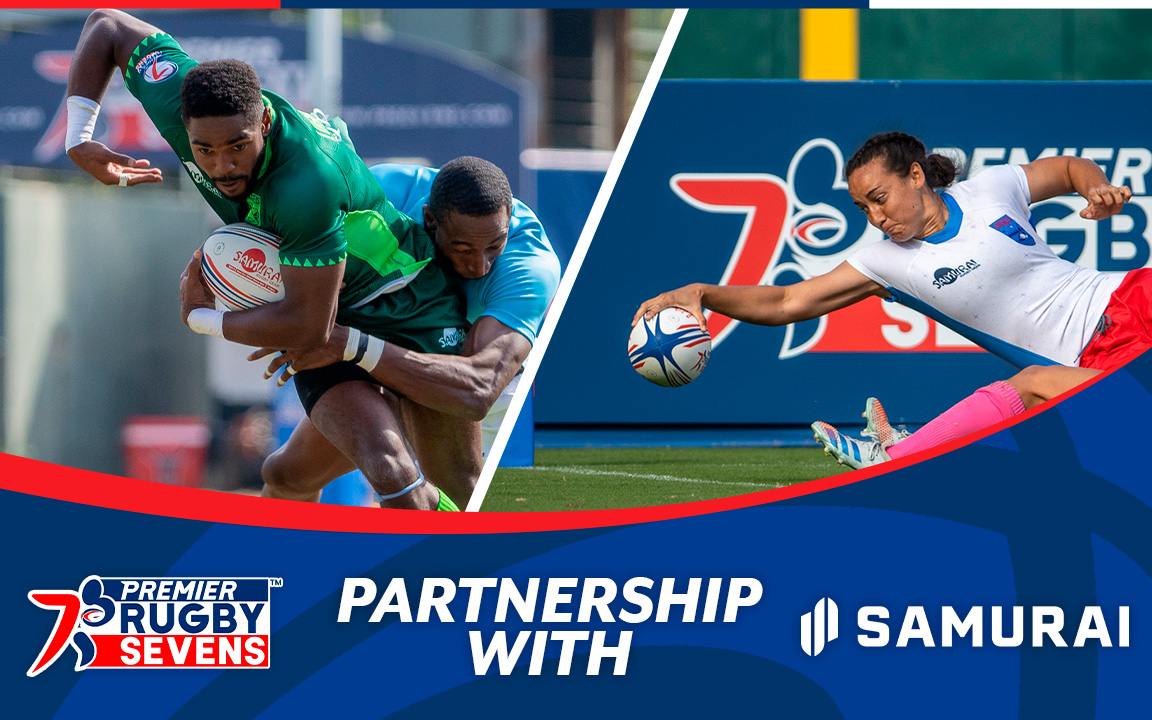 (NEW YORK, April. 26, 2022) Premier Rugby Sevens (PR7s), the new North American league that will launch in multiple cities this summer, announced Samurai Sportswear will continue to be its official apparel and ball provider. The agreement extends the partnership through 2024.

PR7s and Samurai have started the design process for this year’s kits for the men’s and women’s teams who will represent the Experts, Loonies, Loggerheads, and Headliners. They will reveal the designs prior to the 2022 PR7s season, which will take place in San Jose (July 9), Washington, D.C. (July 16), and Austin (July 30). Samurai will also provide off-field leisurewear and match balls for all games. Fans can purchase PR7s fanwear at PRSevens.com and PR7s events.

“This league is building something special for North American sports fans,” said Terry Sands, Head of Commercial Relationships at Samurai Sportswear. “In tandem with PR7s leadership and players, we are committed to growing the sport of rugby sevens in North America for both women and men. We believe this is a powerful partnership for years to come.”

“As a longtime advocate of rugby sevens, Samurai played an integral role in our league’s debut last fall, and I’m thrilled they will be our partner into the future,” said Owen Scannell, CEO of Premier Rugby Sevens. “PR7s players and fans provided incredibly positive feedback about our Samurai products in 2021. We look forward to revealing our new looks, as we introduce PR7s to new audiences and North American markets.”

Samurai has been a worldwide premium supplier for over 25 years to high-profile teams across numerous sports globally, offering unique and bespoke products to all their partners. The company has a long-standing affiliation and expertise with the rugby sevens format.

As the first league of its kind with men’s and women’s teams competing under one umbrella with equal pay, each PR7s event will boast a party-like atmosphere with bands, DJs, games, contests, partner integration, and special appearances. PR7s also unveiled a revolutionary new prize that unites the men’s and women’s competitions, with combined points throughout the season determining the winner of the United Championship. Eight teams compete within four franchises: Experts, Headliners, Loggerheads, and Loonies. A men’s team and a women’s team represent each franchise.

Samurai is a well-established 25-years old fast-rising brand in the sports and teamwear industry with customers in 24 countries around the world, in a diverse range of sports including rugby.

In 1996, Terry Sands was sourcing a new kit for his Samurai International Rugby Sevens team who were about to debut at the Amsterdam Sevens. He wanted to create a uniquely customised kit that looked great and was of the best quality for his team. Unable to find a sportswear manufacturer that met his requirements, Terry endeavoured to design his own kit for the Samurais – and so Samurai Sportswear was born.

Samurai have since built a strong reputation for supplying very high quality, high specification bespoke sports clothing and equipment. Owning its own production facility enables the Company to deliver world-class levels of service and quality excellence whilst staying true to their core values.