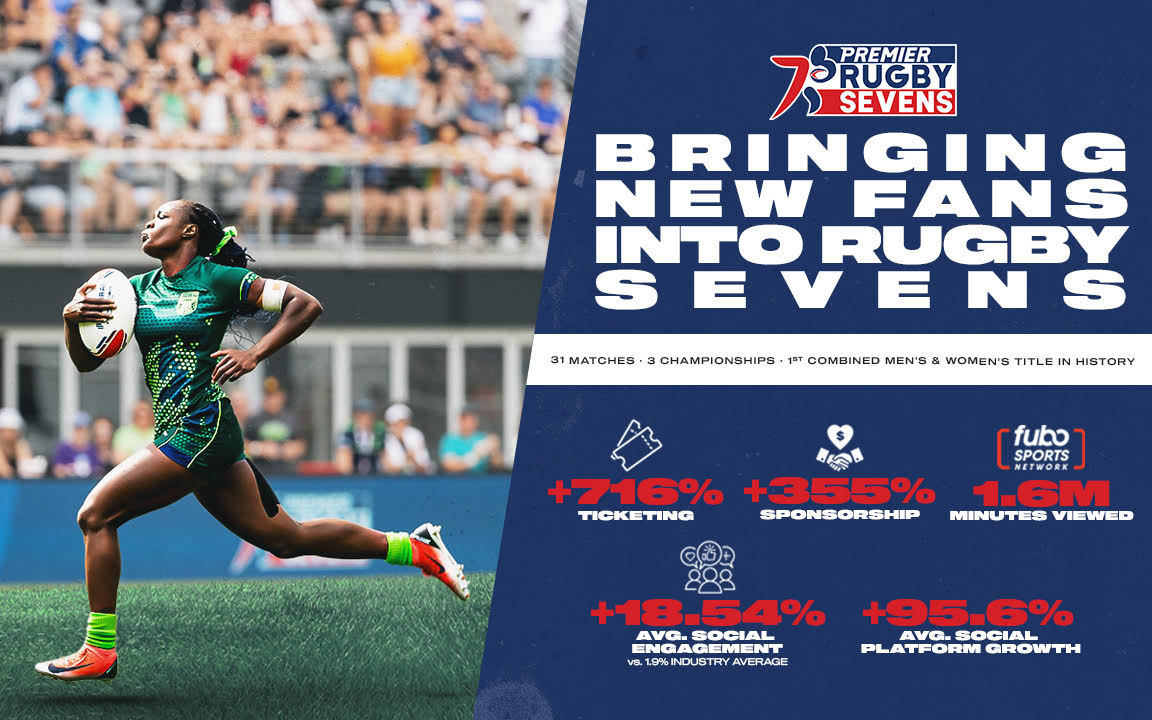 (NEW YORK, Sept. 7, 2022) Following a successful 2022 season, Premier Rugby Sevens (PR7s) tracked significant audience growth with key metrics ticket sales, revenue, social media, and streaming. PR7s brought their festival environment and over 30 action-packed games to MLS stadiums throughout the 2022 summer. As a follow-up to its debut in the fall of 2021, this year featured 156 professional athletes competing on eight men’s and women’s teams in San Jose, Washington, D.C., and the PR7s Championship in Austin on July 30. Standout metrics include:

“Following our debut in 2021, we looked to scale Premier Rugby Sevens into a multi-city, cross-country tour in 2022 to showcase our exciting sport and world-class athletes in top-tier stadiums,” said Owen Scannell, CEO of Premier Rugby Sevens. “Thanks to our players, coaches, partners, sponsors, staff, and a highly engaged fanbase, we achieved everything we were looking for out of our first multi-city tour. We have a fantastic platform to continue building from, and we believe this is the perfect sport at the perfect time to captivate a North American audience well into the future. We will have a number of exciting developments in the coming months as we look to push rugby sevens into the American sports mainstream.”

PR7s is breaking down gender barriers for sports in the U.S. and has achieved several firsts in its brief existence, including:

In PR7s, the Experts, Headliners, Loggerheads, and Loonies are each comprised of men’s and women’s teams that play in their respective competitions. Each gender has a vested interest in their counterpart’s performance.

On the field, the Headliners took home the first United Championship, led by Team USA Olympic co-captain Abby Gustaitis and New Zealander Grace Kukutai for the Headliners women, in addition to U.S. national team standout Devin Short and New Zealander Brady Rush on the men’s side. The Headliners also took home the Kathy Flores Cup for women’s top prize, while the Loggerheads earned the A. Jon Prusmack Cup as the men’s champion, led by Olympians Martin Iosefo and Matai Leuta.

Premier Rugby Sevens (PR7s) is a groundbreaking professional sports league in North America that debuted in 2021. With a focus on accessibility and entertaining content for fans, the league showcases the electrifying sport of rugby sevens through a touring format in cities across the United States. PR7s is the first sports organization of its kind, with four women’s teams and four men’s teams under one umbrella with equal pay. To learn more about Premier Rugby Sevens, go to PRSevens.com and follow the league on Twitter, Instagram, Facebook, and LinkedIn.