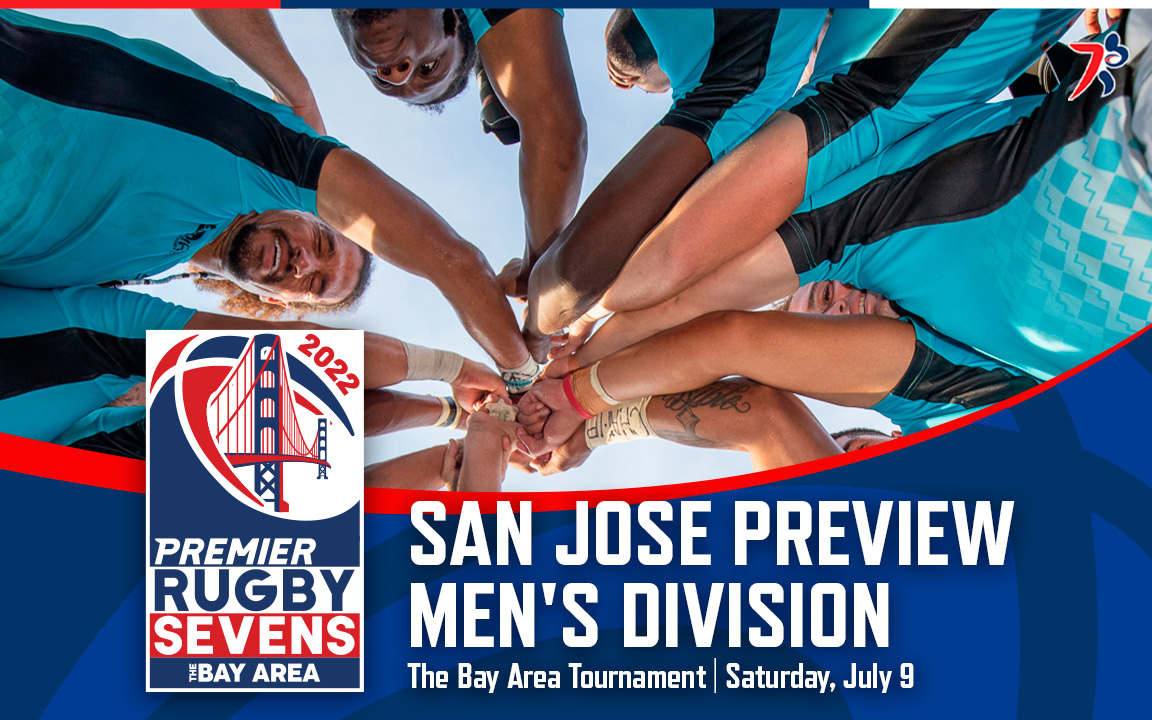 Since Premier Rugby Sevens announced itself to the world in May 2021, rugby fans have been waiting for the promise of the first-ever professional 7s league to become a reality. While there was the one-off Inaugural Championship last October in Memphis, a proof of concept if you will, the wait truly ends Saturday, when PR7s kicks off its inaugural season at PayPal Park in San Jose, Calif.

The purpose of this column is to prepare you for the buffet of talent, skill and drama that will be on display in the Bay. First up, we’ll examine the men’s competition in detail. Later this week, we’ll zoom in on the women. But keep in mind, the men’s results and the women’s results are linked this year through the United Championship, which is awarded to the franchise with the most combined series points between both their men’s and women’s teams after all three tournaments.

Transactions
In any professional sport, rosters are often dynamic right up until game day, and PR7s is no different. Since the recent announcement of the full starting lineups, there have been a few personnel changes.

The Headliners have lost USA speedster Carlin Isles, but replace him with one of the world’s most exciting, up-and-coming wings in New Zealand’s Brady Rush. His father Eric having helped New Zealand win the 2001 Rugby World Cup Sevens, Brady is a second generation All Black.

The 23-year-old was signed to the winningest international 7s team in history in 2021, but New Zealand hadn’t fielded a side in the Sevens World Series from the start of COVID until this April in Singapore, where Rush made his debut. He’s featured in every tournament since, scoring eight tries in 24 matches.

The Experts have lost one former All-American in Nick Feakes and replaced him with another in Bobby Johns. The Loggerheads gain Dayen Joyce, just two years removed from high school, and former Kutztown All-American Aaron Gray. They replace Moses Sepulona and Matt Klimchuck.

The Loonies have lost Eagle Chris Mattina, who has been called up for 15s national team duty, and Canadian collegian Gabe Casey. They gain former Youth Olympian Sione Mahe Nau and John Ryberg, who starred for the now defunct Team in Memphis, scoring against the Headliners. Mahe Nau represented the USA at the 2018 Youth Olympics in Buenos Aires, Argentina.

Positional Battles
Drew Bledsoe and Tom Brady. Marcus Allen and Bo Jackson. Norm Nixon and Magic Johnson. The drama between the whistles pits one team against another. But the drama between now and kickoff will be in the competition among teammates jockeying for playing time.

These battles matter, not just because they’ll go a long way toward determining the outcome on the scoreboard, but because of the opportunity they represent. Before October, no one had heard of Logan Tago. Few knew of Aaron Cummings or Coleson Warner. D’Montae Noble and Akinola Raymond were more well-known quantities to the real nerds. What they all have in common is that prior to having debuted in PR7s, none had earned a call-up to the national team. In the nine months since, all but Warner has made his international debut.

The serially underrated Warner is a valuable case study. A standout for his high school team in Pocatello, Idaho, Warner was underrecruited going into college, despite playing on the all-star circuit in front of the usual college and age-grade scouts. He landed at an upstart program in Lindenwood-Belleville, helping the Lynx win a D1AA national championship in 2018, the same semester the campus went out of business and closed.

He transferred 45 minutes across town to Lindenwood’s main campus in St. Charles, MO, home of the Lions, winners of three-straight national championships in the nation’s top division from 2018-2021, and the largest collegiate roster in the country. There, he’d fight through a thick cast of players recruited over him to help the Lions win the last of their three-straight titles.

A few months after graduating, the skinny kid from Idaho found himself fighting an uphill battle for playing time once again. This time as a relative unknown playing against the best players in North America as a member of Team.

Assembling the week before the Inaugural Championship, he was stuck behind Canadian international Tom Isherwood and Jerome Nale, also a young talent, but with somewhat of a name for himself and something Warner coveted – an invitation to train with the national team in Chula Vista, Calif.

Nale and Isherwood won the minutes early, but Nale suffered a nasty broken elbow, opening up some daylight for Warner. He capitalized, scoring against the Loggerheads and playing well enough to make the Dream Team in Memphis. Though he’s yet to make his debut for the Eagles, he was routinely called into national team camp to compete for a roster spot throughout the World Series season.

Now, he and Nale find themselves back on the same team in the Headliners, once again competing for playing time. Both will have to contend with 33-year-old Tai Enosa, another veteran acquisition for the Headliners, coming over from the Locals. When Enosa earned his first cap for the national team in 2009, Nale and Warner were still in elementary school.

All three of them are class dangermen, but there is only room for two halfbacks on the field at a time. For Headliner coaches Tim Stanfill and Peter Tiberio, divvying up those minutes is going to be an unenviable task.

Whoever wins the flyhalf spot will be taking the jersey of Folau Niua, the two-time Olympian who suited up for the Headliners in October, which is fitting, considering Nale and Warner are two young guns trying to break into a position to inherit his national team jersey as well.

The fight for room on the national team depth chart at the halfback positions is one of the positional battles that crosses team lines this July, as the Experts have their own three-way logjam with Naima Fuala’au, Marcus Tupuola and Kahunu Koi.

The 24-year-old Fuala’au earned his first international cap at 19-years-old and has been groomed to be Niua’s heir apparent. Tupuola, 26, has four World Series tournaments under his belt. Kahunu Koi, 19, is yet uncapped, but tabbed by many in the know to catch up to his elder teammates in the short term.

Fuala’au was a consistent starter in the Experts’ title run in October, and the flyhalf jersey is his to lose. That’s underlined by Tupuola’s and Koi’s shared ability to seamlessly slide elsewhere in the backline. While these three may mix well together positionally as Experts, make no mistake, they’re still competing against one another in the bigger picture.

Match-Ups
The forward pack for the Headliners looks mighty. Devin Short, Tommy Clark and Lance Williams were key cogs in the Loggerheads reaching the final in Memphis, and they won’t be any less intimidating in Headliner pink. Short and Williams are both former college linebackers, so when they line up across from either the Experts or Loonies, look out.

The Experts forward pack, and the tact with which all their opponents approach the game, will hinge on where reigning MVP Logan Tago lines up. If he’s on the wing, look for his cousin Mattie to fill the void up front. Lining up next to a Tago or two will be the aforementioned Cummings, who rode his Dream Team performance from October to a national team debut in South Africa in January, and returning Experts Anthony Welmers (also an Eagle), Corey Jones and Watson Filikitonga.

If Logan lines up in the forwards, the Experts may have the most intimidating pack in the competition. If he doesn’t, giving the Headliners a run for the title may be the Loonies, whose lone returning starter in the scrum is likely to be Canadian international Jared Douglas. Atop that excellent building block head coach Sean White has added the aforementioned Ryberg, affectionately nicknamed the Quadricep with Eyeballs, and Cole Zarcone, who comes over from the Locals. Zarcone’s speed and agility made him an collegiate All-American on the wing, and they’ll make him a match-up nightmare at hooker.