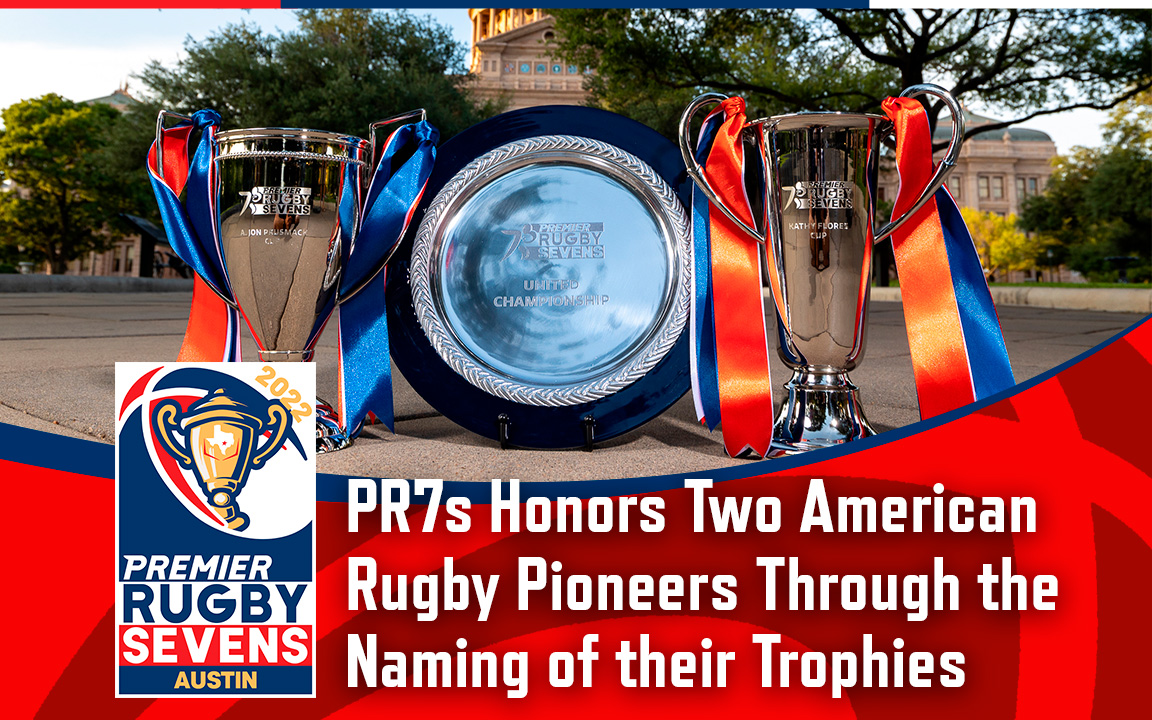 In naming the women’s and men’s championship trophies the Kathy Flores Cup and A. Jon Prusmack Cup, respectively, Premier Rugby Sevens honors two of American rugby’s greatest pioneers. These awards will be handed out for the first time this Saturday, July 30 to the winners of the third and final leg of the 2022 season at Q2 Stadium in Austin, Texas.

Prusmack was inducted into the United States Rugby Hall of Fame in 2013 and Flores in 2016, recognizing decades of commitment, exceptional service, and sacrifice to the American rugby community. Without Flores on the front lines of so many watershed victories advancing the women’s game, or Prusmack’s intrepid investment in commercializing the sport domestically, it’s hard to imagine PR7s taking flight as America’s first professional 7s league.

The throughline for Flores’ career was that everywhere she went, she left the game in a better place than she found it, often in spite of the establishment. No official women’s national team? We’ll make one. No official women’s World Cup? We’ll help make one, and what’s more, we’ll win it.

She did the same as a coach and administrator. While she player-coached Florida State to four national championships in the 70s and 80s, she rose to prominence as a coach during her tenure with the Berkeley All Blues, helping them claim 15 national titles. Her biggest contribution in that role was spearheading the creation of the Women’s Premier League in 2009, establishing an independent, nationwide high-performance competition for women.

Flores was a catalyst in asking friends to form the US Women’s Rugby Foundation in 2005.  The organization has started the Kathy Flores Memorial Fund to continue work in her name.

When she arrived at Brown in 2013 after serving as the first woman and woman of color to coach any national team, rugby was a club program with minimal resources, like on 99-percent of college campuses. The next year, she helped take the team varsity, becoming just the eighth NCAA-sanctioned program in the country.  The university has endowed the Kathleen Flores Women’s Women’s Rugby Head Coach chair to honor her “contributions as a pioneering coach and educator” according to the school’s athletic department website.

Like Flores, Prusmack found rugby in college, playing, coaching, and refereeing well into adulthood. In 1968, he founded “Scrumdown”, which would later become “Rugby Magazine” and serve as the community’s directory, bible, and publication of record for the next 50 years. In 1979 he became the first American to author a book on the sport with “Rugby: A Guide for Players, Coaches, and Spectators.

In 2005, with the tournament at risk due to financial concerns, Prusmack purchased the rights to the USA Sevens, a fledgling stop on the globetrotting, annual HSBC Sevens World Series, from USA Rugby. Over the next 14 years, he moved it from Los Angeles to San Diego and eventually Las Vegas, building it into America’s largest annual rugby event, with attendance peaking at over 80,000.

In 2010, he founded the Collegiate Rugby Championship, putting it on national television alongside the USA Sevens. For 15 years, virtually the only rugby available to the American television audience with any regularity was owned, operated, and produced by Prusmack, blazing the sport a new trail to significance and exposure.

To find evidence of Flores’ and Prusmack’s impact on the game, you don’t have to look any further than PR7s’ Austin finale. Picking up at Brown where Flores left off when classes resume this fall is Ros Chou, assistant coach of the league-leading Loggerheads, and so many of the women playing and coaching in the PR7s Championship are part of Flores’ coaching tree, it might be easier to count those with no connection. The same could be said on the men’s side for the countless players who benefitted from one of the platforms Prusmack conjured from thin air.

Both the *Kathy Flores Cup and A. Jon Prusmack Cup are up for grabs in Austin as the men and women enter a single elimination, brack style Championship Tournament. A third trophy will be awarded to the franchise that accumulated the most points throughout the 2022 season – dubbed the United Championship.

*Kathy Flores name/likeness used with permission from the US Women’s Rugby Foundation.

Founded in 2005, the U.S. Women’s Rugby Foundation (USWRF) is managed by an all-women volunteer board committed to fostering and sustaining the growth of girls and women’s rugby. USWRF has served as an advocate, provided funding and grants, and supported the rugby community through networking and professional development events. USWRF is a non-profit organization.