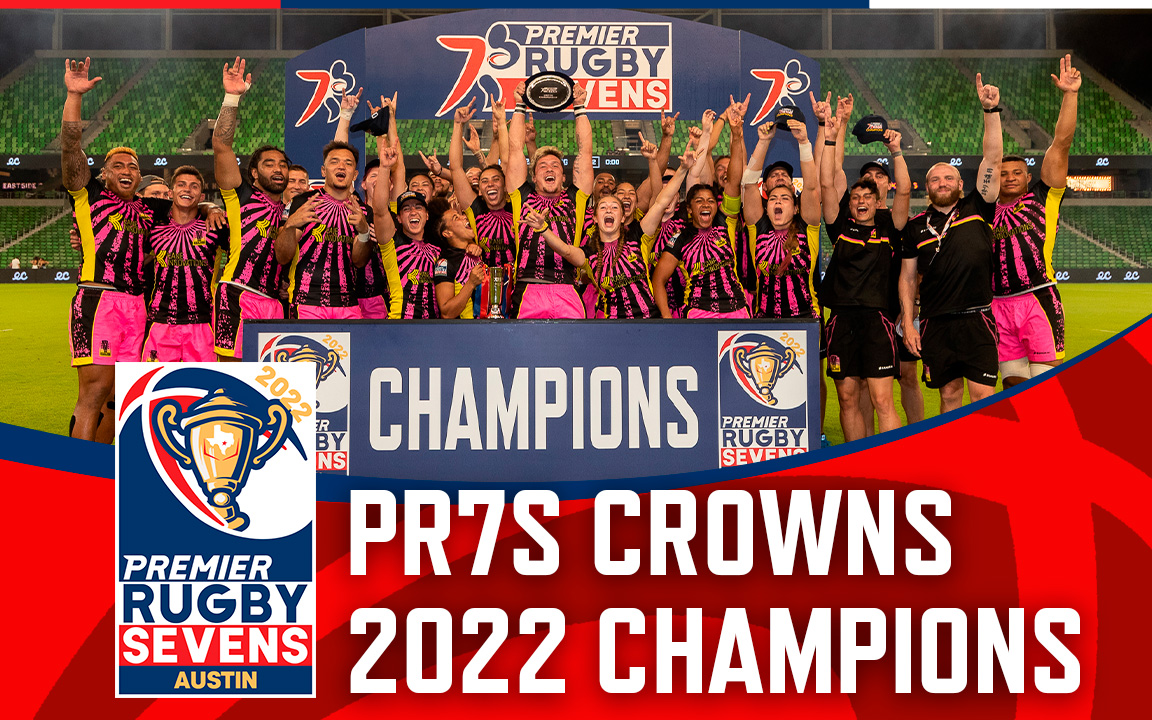 The inaugural season for the North America’s first professional 7s league is in the books, with the Headliners claiming the women’s championship and first-ever United Championship, and the Loggerheads coming from the back of the pack to win the men’s title. Eight teams’ worth of athletes, coaches and support staff crisscrossed three time zones in four weeks, erecting and razing a traveling circus that pulled thousands of fans through the turnstiles to witness America’s newest and most exciting professional sport.

The product they consumed was world-class, appreciably ameliorated from the autumn debut at Memphis’ Autozone Park last October. Olympians Martin Iosefo and Matai Leuta served as the glass slipper for the Loggerheads’ Cinderella run, while the Headliners rode the horsepower of Olympic captain Abby Gustaitis and New Zealand pro netball convert Grace Kukutai to a dominant finish.

The Headliner women started the season with a 17-0 shutout loss to the Loggerheads in San Jose, but they wouldn’t lose again the rest of the season, reeling off seven-straight victories. Though the Headliner men finished the season with a 4-4 record, they placed second at all three stops, which, combined with the women’s tournament titles in D.C. and Austin, was good enough to clinch the United Championship before the men’s and women’s finals kicked off in Texas.

“We’re buzzing. We can’t wait to celebrate with our boys. We’ve had an awesome time together, and I’m just sad it’s ending,” said Kukutai, MVP. “We lost our first game, and from there we kind of didn’t want to feel that again, and we won every game after that. Coming together as a team, with our boys and the management has been awesome.”

In the women’s final, the forward quartet of Kukutai, Gustaitis, Daijan Brown and Emma Farnan proved way too much for the Loonies, whose sole win of the season was their semifinal upset of the first-place Loggerheads. The Loonies got off to a nightmare start, surrendering an early yellow card for an intentional knock-on, leading to Laura Hurff’s long-range try to open scoring. Kukutai added two more before the half, and the Loonies were never able to catch their breath.

The win sees the Headliners claim redemption from a disappointing finish in Memphis, where they went undefeated until falling to the Loonies in the final. When head coach Andy Locke came back to right the ship in 2022, he brought back six players from the Inaugural Championship, the most of any franchise.

The championship also provided Gustaitis the whitespace to write the next chapter in her long, winding story. Twice cut from the U.S. 7s national team, most recently and controversially on the heels of captaining the Eagles to the 2020 Olympics in Tokyo, Gustaitis hadn’t touched a competitive pitch since.

While she was signed to PR7s as an ambassador and broadcaster, it wasn’t certain she’d take the field until the week of the season opener. She jumped into her boots with both feet, playing every stop on the series, and reminded the rugby world why she is still considered one of the best players on the planet.

The Headliners men also boasted an impressive stable of clydesdales up front, led by former college linebackers Lance Williams and Devin Short. Eagle Peter Tiberio, who laced up for the Headliners in Memphis before serving as an assistant coach in San Jose and D.C., took the field in Austin thanks to unavailability. He showed well, but no Headliner played better in Austin than their field general, Tai Enosa.

In the final, he was lost to an injury in the opening minute, and the Headliners struggled to find any rhythm. Still, they trailed by just seven with the clock showing all zeroes and a penalty play at midfield. They drew their own penalty on the first phase, and Moni Tongauiha was binned for slowing the ball down after the whistle. All Black Brady Rush was sent off for a dangerous tackle on the ensuing penalty play, which resulted in the Loggerheads scoring to extend their lead at the death.

Brock Ian Gallagher took home the MVP for an outstanding performance in the final, scoring off one turnover and forcing another during the 26-0 mid-game run that blew it wide open. “This time last year, I quit. I gave up rugby. I was nothing,” said Gallagher. “And then I came back here in January, thanks to the Rhinos. They’re the reason I’m here.”

“Words can’t even describe,” added an emotional Derek Adams, whose seven tries on the season tie for the league lead. “I don’t have my mom here. She passed away when I was young and I said I would promise to become a professional athlete. I started playing rugby last year, I’ve been grinding it, and here I am, first year playing.”

With the Loggerheads win, Royaal Jones, a midseason transfer from the Headliners, became the only player to win both the 2021 and 2022 championship, having won in Memphis with the Experts. He first broke his way into the league via a PR7s open tryout, and caught the eye of the Loggerheads while playing for the Rhinos Academy.