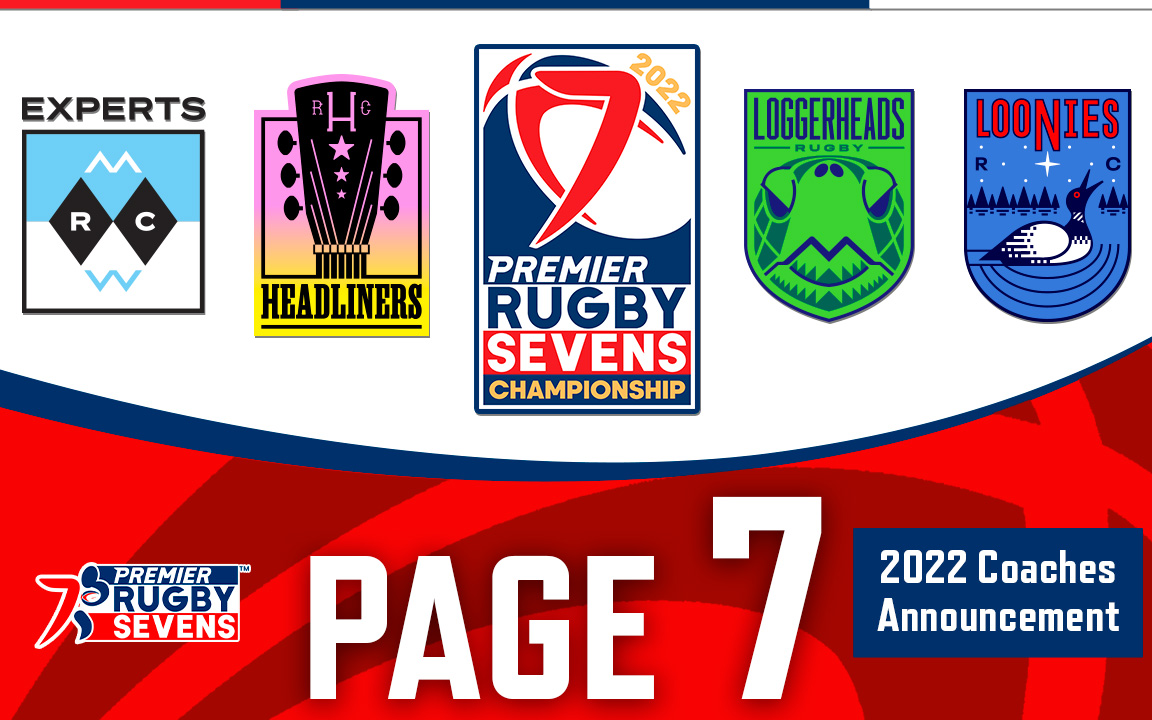 The players score the tries, lift the trophies and hit the little red circle for selfies with fans. In Premier Rugby 7s’ Inaugural Championship in Memphis last October, the players took center stage, as they will when the inaugural season kicks off July 9 at PayPal Park in San Jose. But more than ever before, coaches will impact the wins and losses this season.

The 16 men and women announced as filling the league’s eight coaching staffs earlier this week will play a much bigger role in 2022. Not just because with the expansion to three tournaments from one they’ll have more time to mold their squads, but for the first time ever they’ll have a large say in who they’ll actually be coaching.

Coming back to the Loonies are the entire women’s staff of Kelly Griffin and Robin MacDowall, the former American and Canadian internationals, respectively, who helped the Loonies lift the cup at the Inaugural Championship back in October. The men return head coach Sean White, the former Canadian scrumhalf, who is joined by former rival and American flyhalf Nese Malifa.

The Headliners franchise also maintains continuity from year one, with 2021 player/coach Tim Stanfill hanging up the boots after scoring the first-ever try in PR7s history, to coach full-time. Also stepping off the pitch to assist is a fellow Eagle and Headliner teammate, Peter Tiberio. The Headliners women will once again be headed by Andy Locke, the former national team assistant who skippered them to a second-place finish at the Inaugural Championship. He’ll be assisted by Lauren Barber, a four-time collegiate national champion at Penn State renowned for her work at the youth and high school levels, developing the next generation.

Conversely, the staffs for both the Experts and Loggerheads franchises are undergoing some significant changes. Taking over the Expert women is debutant head coach Irene Gardner, who helped the USA to a silver medal at the 2015 Pan-Am Games. She’ll be assisted by Ros Chou, the head coach for the Loggerheads in October. Chou is transitioning from her role as head coach at Life University to that of Brown this summer.

Taking over the championship-winning Expert men are PR7s debutants JK Anderson and Emil Walton. Anderson, the head coach, is known as a promising domestic 7s up-and-comer, having led the nascent National Athlete Village to several appearances at club 7s nationals. Walton serves as the head coach for the University of Louisville, and both have extensive resumes coaching age-grade all-star sides.

With the historically unique licensing deal between PR7s and Rhinos Rugby, the latter now controls personnel and coaching decisions for the Loggerheads, and the Rhinos opted for a big splash in naming their first hires.

Taking over the Loggerheads women is highly renowned Katie Dowty. One of the original eight women to be signed to USA Rugby’s first-ever full-time professional contracts, Dowty has built quite the name for herself in the college coaching circles, first as the head coach at Central Washington and now at Dartmouth. She’ll be assisted by legendary former South African Springbok, Andre Snyman. Having coached in America since 2011, including a stint with the national team as a defensive advisor, he’s well positioned to make an impact.

Leading the Loggerheads men is a legend of the game, World Rugby Hall of Famer Waisale Serevi. Having represented Fiji in three 15s World Cups and four in 7s, Serevi moved to the United States in 2010, where he’s held countless domestic coaching positions between stints serving as head coach for the national teams of Papua New Guinea, Fiji and Russia. He’ll be assisted by Tiff Fa’aee, who flips from the Loggerhead women to men, as she coached under Chou in October.

The first order of business for each staff is assembling an 18-player roster they’ll carry through the season. And while every coach in PR7s has an extensive background in team building, the inaugural PR7s draft will be a first for everyone. That’s right, a draft. Here’s how it works.

General Manager Mike Tolkin has allocated initial rosters of 12 to each team, made up largely of legacy players who suited up for those franchises previously, in addition to some newly identified recruits.

Coaches must choose six players to protect from the draft, locking in a third of their roster, with unprotected players going into the pool for selection. For the first time ever, prior to the draft coaches can also designate a single “franchise player” from outside the PR7s player pool, giving them a seventh protected player and unprecedented influence over their roster.

The draft order is based on final standings from the Inaugural Championship, with the last-place teams selecting at the beginning of every round, and the champions selecting last each round. The lone exception is the opening round, where the reigning last-place team will actually make the opening two picks of the draft. As a result, they forfeit their fifth-round selection. In every other round, the draft order simply follows worst-to-first, each team picking once, until each roster is full at 18.

The draft will be conducted remotely by the league on June7, about a month before the season kicks off in the Bay Area on July 9. .