PLAYERS TO WATCH IN DC: AARON CUMMINGS AND PLEUNI KIEVIT 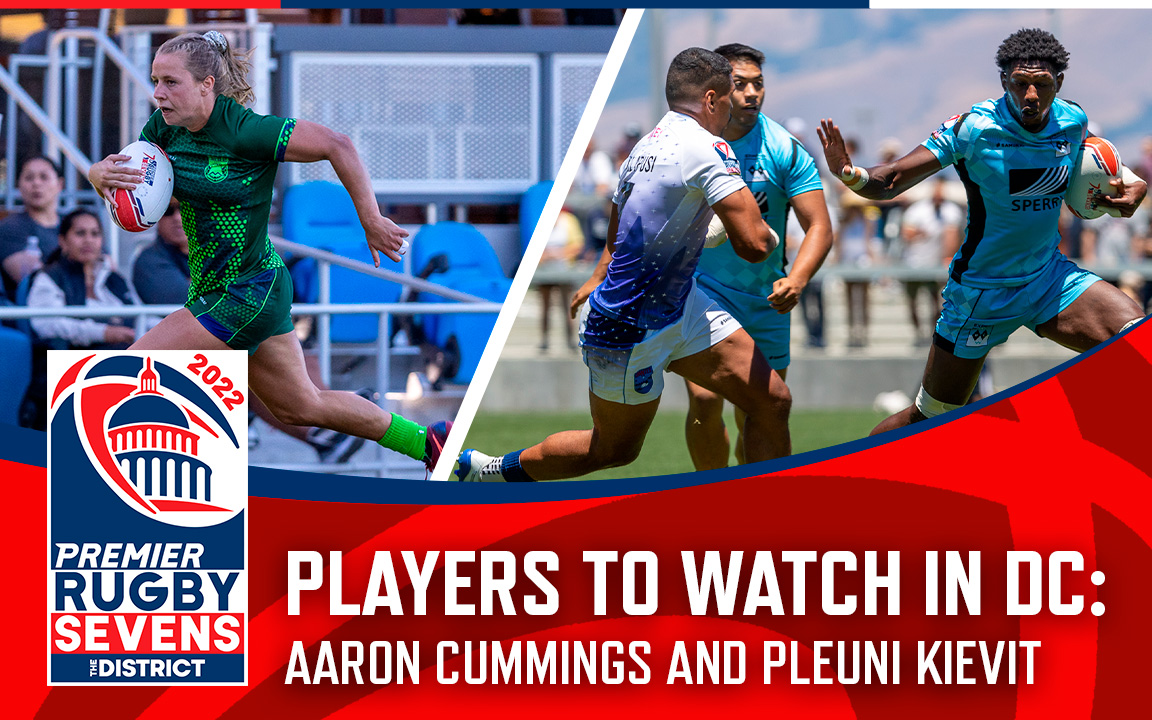 Forty years ago last month, at Sportpark Strijland de Meern in Utrecht, Netherlands, the first ever international women’s rugby match was played, with France defeating the hosts 4-0. When World Rugby introduced the Women’s Sevens World Series in 2012, they tabbed Amsterdam 7s as a host tournament for the first three seasons. All that to say, the Netherlands has been a vanguard for the advancement of women’s rugby through the years.

Sparked by the excitement of Sevens’ return to the Olympics and the advent of the World Series, the Netherlands began offering full-time contracts, including to a 17-year-old Pleuni Kievit, in 2015. She’d become captain and the team’s most outstanding player. In 2018, hers and every Dutch full-time contract went away, and in the aftermath of COVID, the Netherlands women’s sevens program has been shelved entirely through at least 2026.

Already committed to play football at Davenport University, Aaron Cummings caught the eye of the Panthers’ head rugby coach during his lone high school rugby season. He juggled both sports as an underclassman before walking away from football, and eventually the university with his associate’s degree, in pursuit of representing the United States in rugby.

The 180-pound flanker worked his way into the academy sides of a pair of Major League Rugby clubs, never breaking into the professional team or earning a full-time contract. In the gaps between opportunities, he’d return to his amateur club, the Chicago Lions.

For Kievit, her entire livelihood and career had a hole blown through it when the team she captained stopped existing. For Cummings, the stagnation toward his goal caused doubt to creep in. For both, Premier Rugby Sevens proved a land of opportunity.

“It’s a shame,” said Kievit. “It was either I have to quit playing rugby and start a job or go abroad and follow my own pathway, and that’s what I chose, so I’m still able to play in a professional league, but have to be away from home.”

“There was always doubt. There was a lot of sleepless nights, because you never know when you’re going to get the call,” said Cummings. “There was so much pressure, because it wasn’t just dropping out of school. It was working every day, making sure I was in the gym and making sure I was playing full time. Sometimes it will break you, but every time you get broken down, man, you just get ready for the greatest come up.”

Kievit was drafted into the league by Rhinos Rugby, which took over the Loggerheads franchise coming into PR7s’ first full-fledged season. Head coach Katie Dowty also coached the Rhinos at an international 10s tournament, where she went against Kievit. The Rhinos brought her to their academy in San Clemente, Calif. to train for several weeks before accepting an offer to play 7s in Japan. Shortly after her season ended there, she found out she was a Loggerhead. Like she did for the Netherlands, she captained and starred for the side in San Jose.

Cummings was signed to the league by general manager Mike Tolkin after his first summer playing competitive club 7s. Though he’d goofed around on some social 7s sides, he took last summer with the Lions, one of the top 7s clubs in the country, a little more seriously. The result? An undefeated season culminating in a national championship.

“Chicago Lions have been so pivotal in my development and in my playing, because they were always my drawing board. I would be in college, some things happened and I have to be out for a semester, I would play with the Lions,” said Cummings.

“I’d get back in school, leave it again, go to the Free Jacks. It doesn’t work out the way I want it, go back to the Lions. Go to Houston, worked at Dollar General as a stock boy six days a week, working on game days, biking four miles to work every day, going to the gym, trying to do everything I can. That doesn’t work, I go right back to the drawing board. Back to Chicago.

“Every single time I went back and left, something good has happened to me. Every time I failed, I knew I just had to go back to the Lions, reset myself, figure out what I could do better as a player. Chicago always brought me back to the center and kept me grounded.”

When I first saw Cummings at Davenport, he was a skinny, mouthy scrumhalf. Fast forward to Memphis, and he only seemed skinny in comparison to his Team teammates Danny Barrett and John Ryberg.

In defense, Cummings plays like someone’s holding his family hostage and the only thing that can free them is the ball. That, combined with deceptive speed, long limbs in attack and perseverance to overcome a couple of years worth of doubt, earned him a spot on the Memphis Dream Team and a full-time contract with Team USA. In January, he made his international debut in Malaga, Spain.

“For me it’s all about working hard. That’s always been my game. I’ve never strayed away from it,” said Cummings. “Just trying to be a mongrel and have a high work rate, whether that’s making all the tackles I can, getting over the ball, making some cover tackles, or hustling down the field so they don’t score a try, get an ankle tap, whatever. For me it’s all about working hard for my teammates.”

Saturday in San Jose, Cummings showed the polish of someone who’s been training full-time shoulder-to-shoulder with Olympians, helping his new team, the Experts, retain their crown, even with reigning MVP Logan Tago out injured.

Kievit, leery of the physicality of her North American counterparts, jinked, juked and quarterbacked the Loggerheads to the only undefeated record in the Bay Area Tournament.

The Experts and Loggerheads arrive in D.C. in first place. They, like Cummings and Kievit, won’t sneak up on anyone ever again.

“This has been so fun this year. By far better than last year, and it’s a series,” said Cummings. “That just makes it even more competitive and teams even more hungry. If you did good or bad one week, so what, you get another week, and another one after that. The anticipation is just building.”

“I think the atmosphere was really good in San Jose,” said Kievit. “A lot of people came and watched, and we really heard it on the field. The vibe was really good. Also, the teams we played against, none of them had a big score against one another. The competition is a really high standard, and that’s good to know for the next series. We’re the team to beat, but you never know how it’s going to end after the turnaround.”