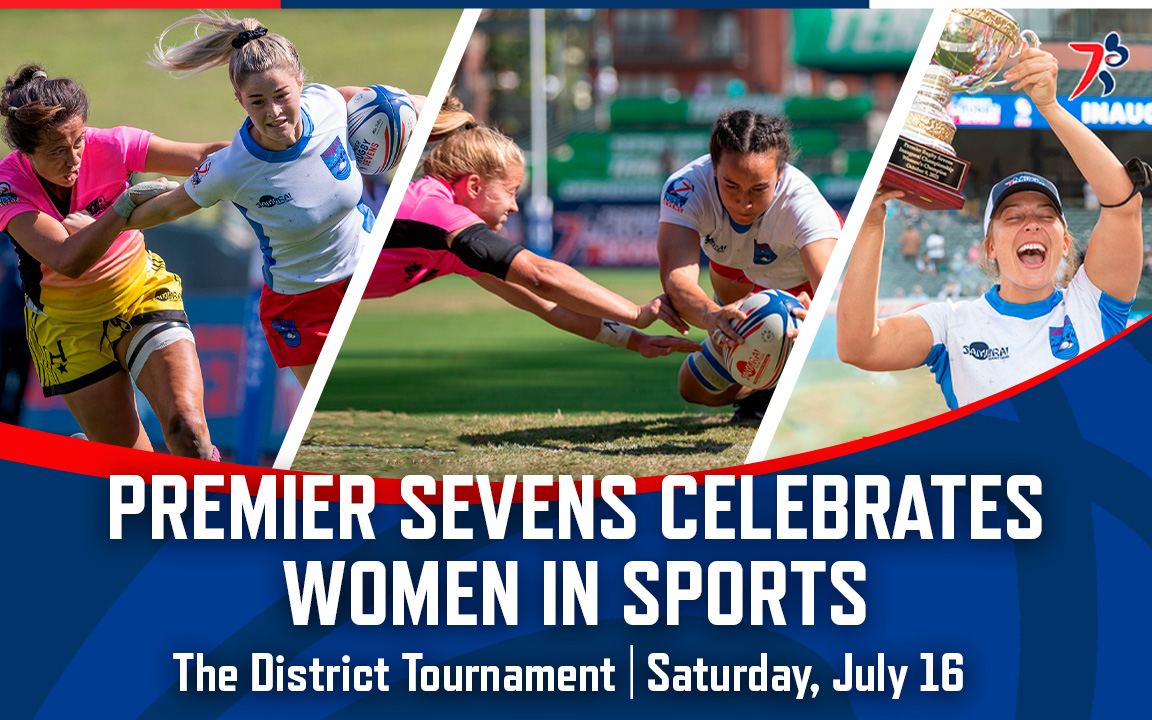 (WASHINGTON, D.C., May 11, 2022) Premier Rugby Sevens (PR7s), the first league of its kind with women’s and men’s teams competing under one umbrella with equal pay, will celebrate women in sport throughout their tournament at Audi Field in Washington, D.C., on Saturday, July 16. The celebration coincides with the 50th anniversary of the first organized women’s rugby in the United States and the 50th anniversary of Title IX in the NCAA.

During the event at Audi Field, PR7s will hold a Sports Bra Drive in collaboration with the nonprofit Leveling the Playing Field (LPF) and the Washington Collation of Women’s Professional Sports (WCWPS). The initiative will help local girls in need receive the proper equipment and attire to participate in rugby and other sports. Event attendees can also donate a sports bra through their ticket purchase – PR7s is offering a special ticket that includes a $20 donation to LPF, which covers the cost of a new sports bra for a young person in need. Fans can purchase tickets HERE.

In advance of the tournament, PR7s will host several community-focused activities to celebrate women in sport. Female athletes from PR7s, including several Olympians, will visit with young athletes in the D.C.-area, including young female rugby players and youth from Girls, Inc.

“As North America’s first professional rugby league for women, we are proud to actively break down gender barriers while celebrating the history of those who have paved the way for female athletes playing sports in 2022,” said Kellie Cavalier, Vice President of Premier Rugby Sevens. “D.C. is the perfect place to come together for this celebration of women in sport.”

Shortly after announcing Washington, D.C. as a host city, Premier Rugby Sevens joined the Washington Coalition of Women’s Professional Sports alongside the Washington Mystics, Washington Spirit, DC Divas, and D.C. Shadow. The WCWPS serves as a supportive organization for all women’s sports programs and professional clubs in the greater Washington, D.C. region. PR7s, WCWPS, and Events DC are collaborating to produce a thought leadership summit related to women in sports leading up to the event on July 16.

“The Washington Coalition of Women’s Professional Sports is thrilled to welcome Primer Rugby Sevens to Washington, D.C., and support the impact that they are making for female athletes on and off of the field,” said Kaitlin Brennan, Program Director of Leveling the Playing Field.

“Events DC is proud to be an ally, advocate, and catalyst for girls and women in sports in our region,” said Ralph Morton, senior vice president, and managing director, Sports & Entertainment Division at Events DC. “As a city where people have long gathered to voice their desire for progress and change, our nation’s capital is the perfect place for Premier Rugby Sevens to commemorate this important occasion. We look forward to celebrating together on July 16.”

“The USWRF is pleased to partner with PR7s in celebrating 50 years of women’s rugby in the U.S. This event will give us an opportunity to celebrate the past while watching history being made,” said Kerri Heffernan, Vice President of the U.S. Women’s Rugby Foundation.

This year, PR7s unveiled a revolutionary new prize that unites the men’s and women’s competitions, with combined points throughout the season determining the winner of the United Championship. Eight teams compete within four franchises: Experts, Headliners, Loggerheads, and Loonies. A men’s team and a women’s team represent each franchise.

About Leveling the Playing Field

Founded in 2005, the U.S. Women’s Rugby Foundation (USWRF) is managed by an all-women volunteer board committed to fostering and sustaining the growth of girls and women’s rugby. USWRF has served as an advocate, provided funding and grants, and supported the rugby community through networking and professional development events. USWRF is a non-profit organization.