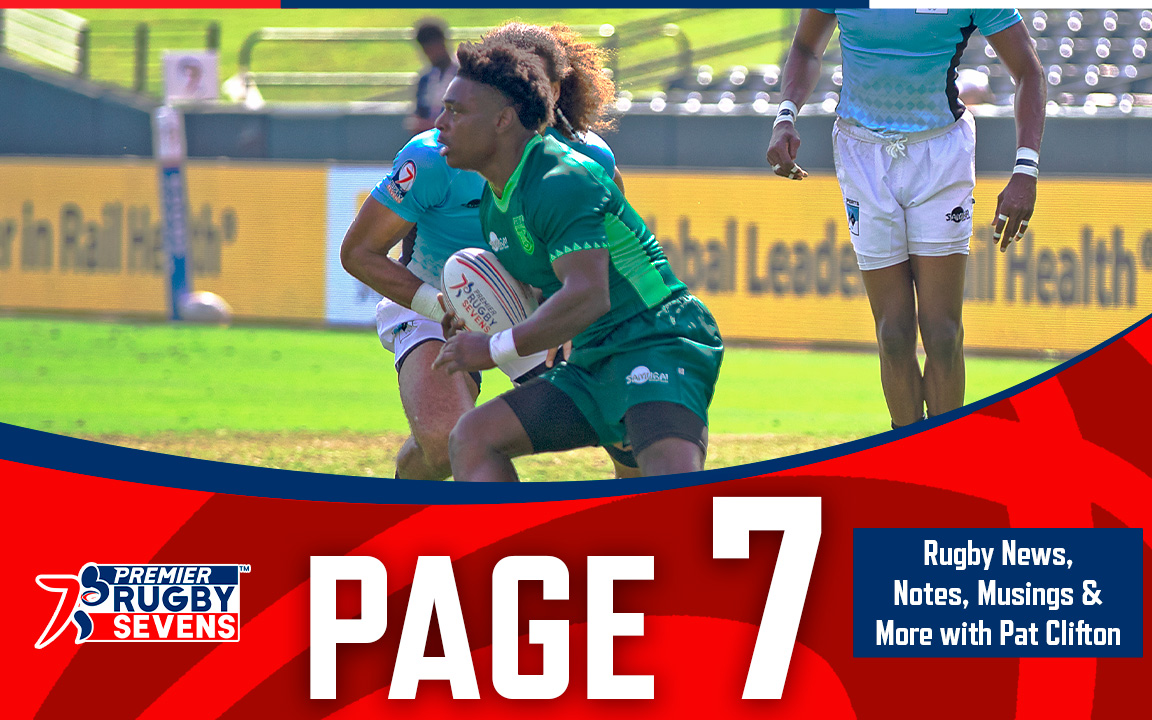 It’s your debut tournament and the first time ever representing your country on the HSBC Sevens World Series. It’s down to the final minute of the final game of the day. You didn’t touch the field the first two matches. Just watched from the comfort of your tracksuit as the 13th man.

We’re all tied up, 7-7. Win, and you take the pool. Lose, and you draw defending Olympic champion Fiji in the quarterfinals. The opponent? First-place South Africa, winners of six-straight tournaments and 36-consecutive matches, the second-longest win streak in World Series history. The Blitzboks haven’t lost since before COVID.

That was the exact scenario for Loggerhead D’Montae Noble last weekend, the 24-year-old former Kutztown All-American making his international debut in Singapore.

“Some people take him the wrong way, because he has a lot of confidence,” said Dr. Gregg Jones, Noble’s college coach at Kutztown. “People don’t know how to take it, but confidence is a good thing.”

It sure was in Singapore, where Noble needed every ounce of confidence densely packed into his 5-foot-8-inch frame to carry the ball three times in the final 60 seconds, soaking up five defenders in total, squeezing off a miraculous offload to Perry Baker for the walk-off try.

The sight was a familiar one for Premier Rugby Sevens fans, who watched Noble spin through the Team’s defense like the whirlingest of dervishes to offload to Martin Iosefo for one of the Inaugural Championships’ top tries.

Noble was called into the USA squad for Singapore to replace an injured Stephen Tomasin, becoming the fourth PR7s athlete to make their national team debut since putting their skills on display in Memphis last October. He followed up the South Africa game-winning assist with a brace of tries against Argentina in the fifth-place final.

“I thought we needed something in our squad that was different and a little unorthodox and outside the box, and D’Montae is certainly that in attack,” said Team USA head coach Mike Friday. “I always had it in my mind to put him in the 12 for the South Africa game, because I wanted to see what he could do and where he could do it.

“D’Montae did exactly what we wanted him to do, which is he finds space and creates mayhem and chaos with his feet and he’s deceptively strong. He found a way to find that offload and get the job done. It was a hell of an introduction.”

Noble’s path to Singapore started at age eight, when he first picked up a rugby ball. He hit the paved portion in middle school, when the coaching staff of Kutztown University, one of the top rugby programs in the country, especially for sevens, first laid eyes on him.

“Even in eighth grade, the little guy that he was, he was still doing the same thing he does now,” recalled Jones during a 15-hour recruiting trip to the Tropical 7s tournament in Florida to try and find the next Noble. “I never talk to anyone that young and I thought this is kind of silly, but we talked to him anyway and continued to stay in touch with him all through his high school career.”

Noble struggled with injuries during his time in Kutztown, which was ultimately cut a season short by the pandemic. But, like it didn’t take long for his talent to catch Jones’ attention as an eighth grader, Noble didn’t need much opportunity to turn heads and earn All-American honors.

He did it largely as an outside back, using his speed and agility to slice up his ordinarily-gifted contemporaries. To play on the international stage, he’s had to develop the skill set necessary to play scrum half, sevens’ version of quarterback.

“I’m really glad he’s where he’s at right now. For years I’ve been telling him that’s your wheelhouse,” said Jones. “That’s where you belong and someday you’re going to play scrum half for the Eagles. And he would just say to me, that’s crazy coach, I’ll never play scrum half. And now that’s where he’s playing.”

Friday, the similarly diminutive former England captain, thinks Noble’s ceiling at that position is limitless. While his skills and game sense aren’t yet at the level of Fiji’s Jerry Tuwai, widely considered the best sevens player in the world and the closest on the Series to Noble’s athletic doppelganger, other aspects of his game are unmatched.

“I think D’Montae’s feet are far far better than Jerry’s, and there’s nobody on the world circuit with feet like his,” said Friday. “The nearest thing I’ve seen to feet like his are Jason Robinson’s, and that’s a huge compliment to D’Montae.

“He showed glimpses to the world of what he’s capable of with ball in hand, but he’s also exceptionally powerful in defense, not only in the tackle, but also in his body height to get over the ball and jackal.

“The more he becomes accustomed to the speed of the World Series and the more that he commits to doing the hard conditioning work that’s required to be on the world circuit, then I think D’Montae Noble could be a superstar on the circuit because he’s different. He has that x-factor, and he can break the game up with one step and one shuffle.”