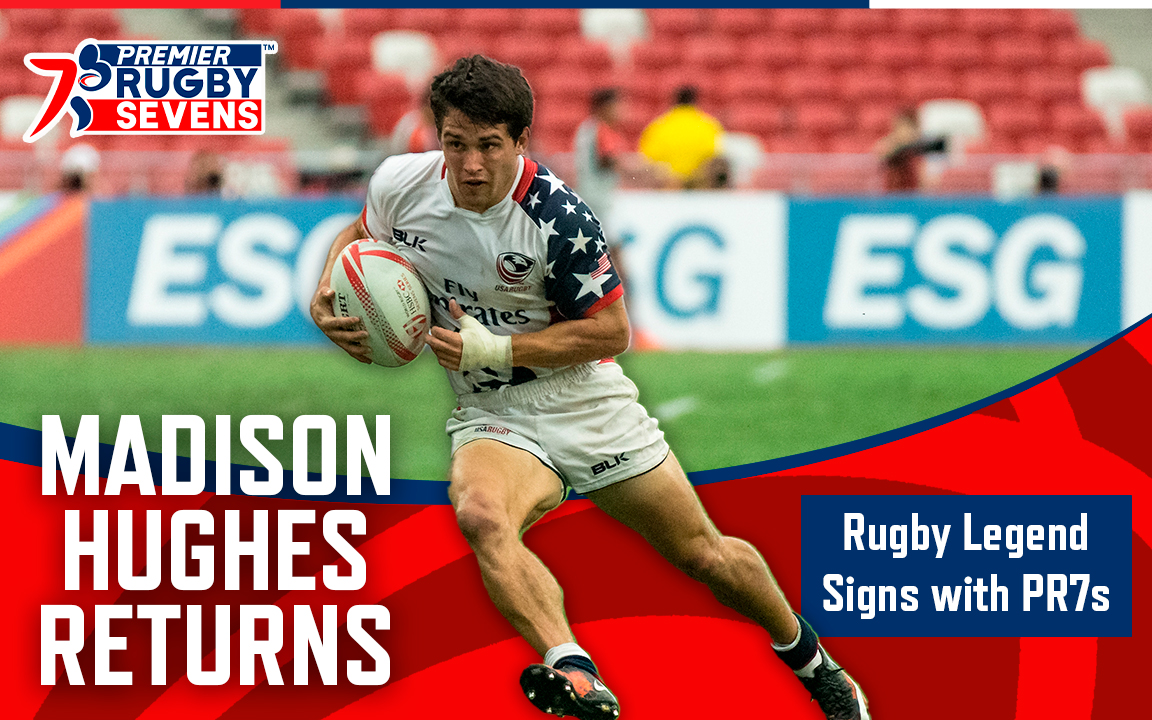 “Madison Hughes represents class, consistency and talent,” said PR7s general manager Mike Tolkin. “He was the centerpiece among many giants and led the Eagles to some historic victories as captain. We’re thrilled to have him part of PR7s.”

When PR7s kicked off its Inaugural Championship last October at AutoZone Park in Memphis, Tennessee, the proof-of-concept tournament preceding the league’s first full-scale season, he was there. Not in form-fitting playing kit like many of his Olympic teammates, but in a suit as a color commentator.

In the weeks following Tokyo 2020, held in the summer of 2021, Hughes announced an indefinite, well-earned, sabbatical from playing. The London-raised son of a New England native who spent summers at his grandparents’ house in rural Massachusetts growing up was first drafted into national team duties as a 21-year-old junior at Dartmouth.

Scoring 33 points in his international debut, Hughes immediately caught the eye of Eagles head coach Mike Friday, who would bestow the title of captain on the youngest player on the team ahead of the 2014/2015 season.

“Madison is a selfless player who has both the respect of the squad and the ability,” Friday said at the time. “He is not a shouter but understands the game and speaks with authority, calmness, and clarity on what he wants from the boys and has shown the leadership in driving the squad in what we are looking to achieve.”

Balancing his senior year of Ivy League studies and the captaincy, Hughes led the Eagles to their first-ever tournament win on the HSBC Sevens World Series in London in 2015, a watershed victory for the program at the time, but just one of many new heights to which Hughes would help the program ascend.

His first full season on the World Series ended as the USA’s best-ever, jumping seven spots, from 13th to 6th in the final standings from the previous campaign. The following year, Hughes led the World Series in points, helped the Eagles to their first-ever victory over global powerhouse New Zealand and qualify for the 2016 Olympics in Rio.

Hughes’ contribution to the program’s journey from participant to contender can’t be overstated. Before he got there, the men’s national team wasn’t much more than an alsoran on the World Series, having never placed higher than 10th in the final standings.

For eight faithful seasons, Hughes was a marker of excellence and consistency for the surging national team, not only leading them nearly annually in points, but also in tackles. 45 tournaments later, he sits sixth all-time in World Series points, well ahead of Loggerheads coach and former Fijian star Waisale Serevi, widely considered the best sevens player of all time.

Hughes’ wealth of experience, deft kicking boot and knack for making clutch plays down the stretch will undoubtedly make a big impact for whichever team is lucky enough to slip a jersey on him come July.