HISTORY OF RUGBY IN THE BAY AREA 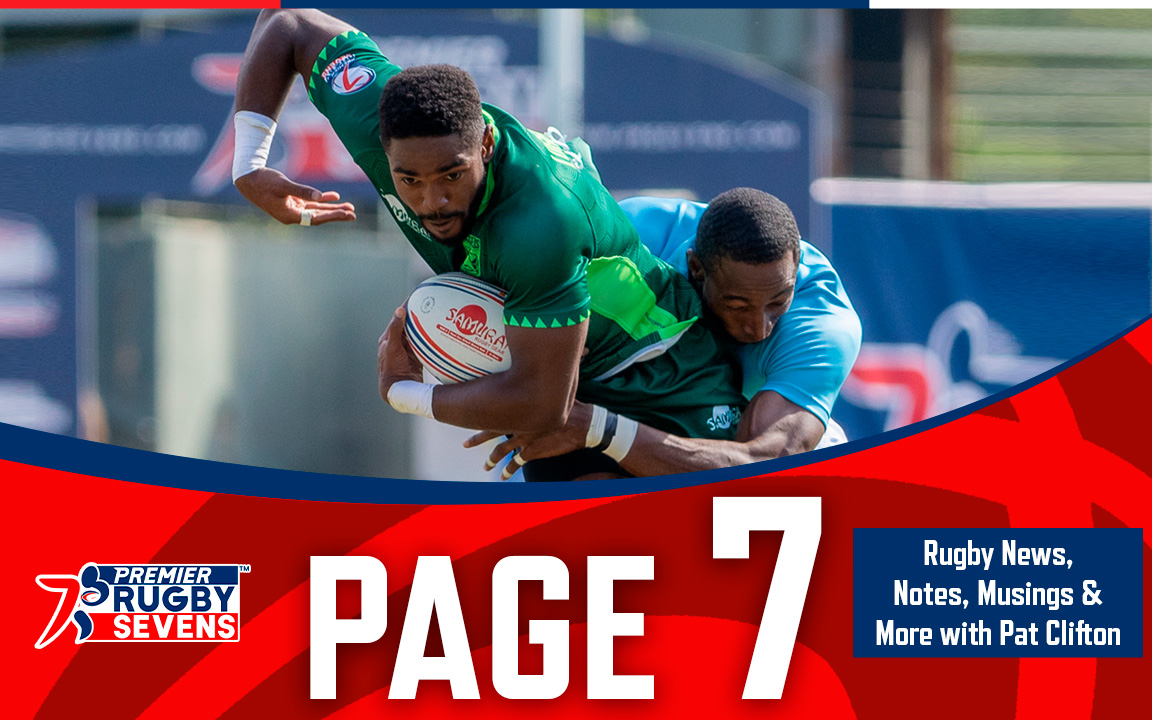 You couldn’t have done it anywhere else. At least, not as with this much romance could you have kicked off the first-ever season of America’s and the world’s first-ever professional rugby sevens league anywhere other than the Bay Area.  It’s fitting, then, that Premier Rugby Sevens will open its maiden season July 9 at PayPal Park in San Jose, in the heart of Northern California’s famed Silicon Valley and the spiritual homeland of American rugby.

Most popularly and most recently to the world of rugby, the Bay Area is known as the host site of America’s first-ever World Cup, the 2018 RWC Sevens. The largest, best-attended, most-watched, most revenue-generating rugby event ever on American soil, the Sevens World Cup in San Francisco was an obvious stepping stone to Thursday’s announcement that the 15s World Cup is coming to America in 2031.

That quadrennial is the third-largest sporting event in the world, behind FIFA’s World Cup and the Summer Olympics, and projections of what it could do to unlock the American sporting market for rugby are grand. But to stop the story there would be to ignore a century’s worth of points on a timeline leading PR7s to San Jose. So as we collectively try to manifest American rugby’s next patch of greener grass, let’s also examine one from the past.

Sevens in the Bay

The event provided World Rugby the proof of concept needed to award the USA its crown jewel in 2031, and, if nothing else, proof you can throw a huge party around sevens in the Bay Area, and people will show up.

“I remember going to Giants games growing up, and I’d never seen it that full. Seeing a full stadium, period, no matter where you are, is just an incredible atmosphere, and that was packed. Every single seat was filled during that quarterfinal, and it was roaring as well.”

Tomasin grew up in nearby Santa Rosa, the North Bay, about 45 minutes from the Golden Gate Bridge. His uncle played rugby at UC Davis in the ‘80s and is still involved with the local men’s club, so even though he didn’t play organized rugby until his senior year of high school, Tomasin was aware enough to know he lived in somewhat of a hotbed.

“While I was growing up in the 2000s, it’s one of the only places in the United States where there really was a vibrant scene at the youth level,” Tomasin recalled. The reasons even he knew of the Bay Area’s rugby prowess are more than 100 years old.

Rugby’s Spiritual Homeland
In 1905, a rash of football-related deaths sparked nationwide concern over the safety of gridiron, including that of an 18-year-old Santa Clara High School student who collapsed during a game and died later of a fractured skull. President Theodore Roosevelt, whose son was injured playing football, called a meeting with university presidents to discuss the troubling trend.

The following year, several colleges in Northern California, including St. Mary’s, Cal and Stanford, dropped football altogether, adopting rugby in its place. From then until America entered the First World War, ‘The Big Game’, the famed annual rivalry between Stanford and Cal, featured rugby, drawing tens of thousands of fans.

However, gridiron remained the preferred code throughout the rest of the country, and Northern California eventually acquiesced, reinstating football shortly after the war. The harvest from rugby’s golden years was enough to fuel the USA to back-to-back Cinderella runs, winning gold medals over heavily favored France at the 1920 and 1924 Olympics.

The American roster was made up almost exclusively of California college kids who picked up rugby right at the height of its scholastic heyday, including a handful from Santa Clara University, whose campus lies in the shadow of PayPal Park. Outperforming the lot was Rudy Scholz, the speedy scrumhalf who’d lead the USA to glory in both Antwerp and Paris.

The 1924 Games would be rugby’s last until 2016, when it was reintroduced in Rio in the form of sevens. In the 98 years between Olympic appearances, the sport struggled Stateside to regain any semblance of the popularity or notoriety it enjoyed before the First World War.

But, largely through institutions like the aforementioned universities and the Olympic Club, and people like Scholz, an alumnus of both the former and the latter, there’s connective tissue binding American rugby’s halcyon past, present and promising future in its Bay Area mecca.

After the Olympics and WWI, Scholz would play for the Olympic Club and serve as the secretary of the Northern California Rugby Football Union. He didn’t play his final competitive rugby game until 1979 at the age of 83.

College rugby’s version of the Heisman Trophy is named after the two-time gold medalist and awarded annually by the Washington Athletic Club to the most outstanding men’s collegiate player. Before Harley Wheeler jinked and juked in Team’s backfield at PR7s’ Inaugural Championship in October, he won the Rudy Scholz Award for his sweet feet at Life University.

Home Game
Northern California is a wellspring of rugby talent, showcased every January since 1984 at the famous Kickoff Tournament, a massive youth festival hosted by the Sacramento Valley Rugby Foundation. That’s where a young Stephen Tomasin got his first taste of organized rugby.

“I decided not to play baseball my senior year of high school because I really thought I was going to get a scholarship to go play football somewhere. That opened the door for rugby, and as no scholarships came through the door, my cousin kept nagging me to come play for the team just for the weekend at that Kickoff Tournament they put on in Sacramento every year,” the Olympian recalled.

“We went and played, and that was it. I was hooked. I made the decision pretty quickly after that I wasn’t going to play football in college and that I was going to go to San Diego State, play rugby and push it from there.”

Northern California has produced a trove of national team players, Hall of Famers and stars. So when PR7s comes to town July 9, Tomasin won’t be the only one playing to a home crowd.

Two of Tomasin’s current Eagle teammates also grew up a sourdough’s throw away from PayPal, including fellow Santa Rosan Jerome Nale, whose impressive run with Team in Memphis was cut short by a nasty elbow fracture. He’s now back healthy, with the national team in France, and could have no shortage of fans in the stands at PayPal.

Team’s Danny Barrett is the pride of Pacific, Headliner Folau Niua is that of East Palo Alto, fellow Headliner Nick Boyer hails from Sacramento, and Nana Fa’avesi is a native of Salinas, to name a few. Perhaps none of the Bay Area’s favorite rugby sons or daughters are thought of more fondly than Kelly Griffin, though, head coach of the Loonies, winners of the PR7s Inaugural Championship.

The Berkeley native picked up the sport at UCLA before becoming one of the first to sign a full-time training contract with the national team. In the years between then and representing the USA in rugby’s Olympic return in Rio, she led her local club, the Berkeley All Blues, to numerous national championships.

PayPal Park
Originally set to co-host the RWC Sevens in 2018, PayPal Park missed out on the fun when organizers eventually shifted to a one-stadium setup, opting for the home of the Giants. Still, PayPal is no stranger to international sevens, having hosted the Silicon Valley Sevens in 2018, where Tomasin also booted up for the USA.

“It is such a cool stadium. It’s just a rugby-perfect stadium. The right size for a rugby tournament,” said Tomasin.

“They’ve got that big bar that goes all the way down the north try zone, and we all know rugby has a great social scene.”

The Scoreboard Bar, a 45-foot-long monstrosity roomy enough to accommodate up to 35 bartenders and 500 patrons all at once, is a staple feature of PayPal Park, built for $100 million dollars and opened in 2015 as Avaya Stadium, the home of the San Jose Earthquakes. On top of boasting North America’s largest outdoor bar, it was also built with the steepest arrangement of seating in Major League Soccer.

If current and future Olympians playing Olympic-style rugby, the most electric sport on Earth, in Olympic rugby’s ancestral homeland, in front of their home fans, in a state-of-the-art stadium that puts you either right on top of the action or at a try-zone-sized bar isn’t enough of a reason to buy your ticket for San Jose, come for the In-N-Out. There’s literally one in the parking lot.