EXPERTS MEN AND LOGGERHEADS WOMEN SHINE IN THE BAY 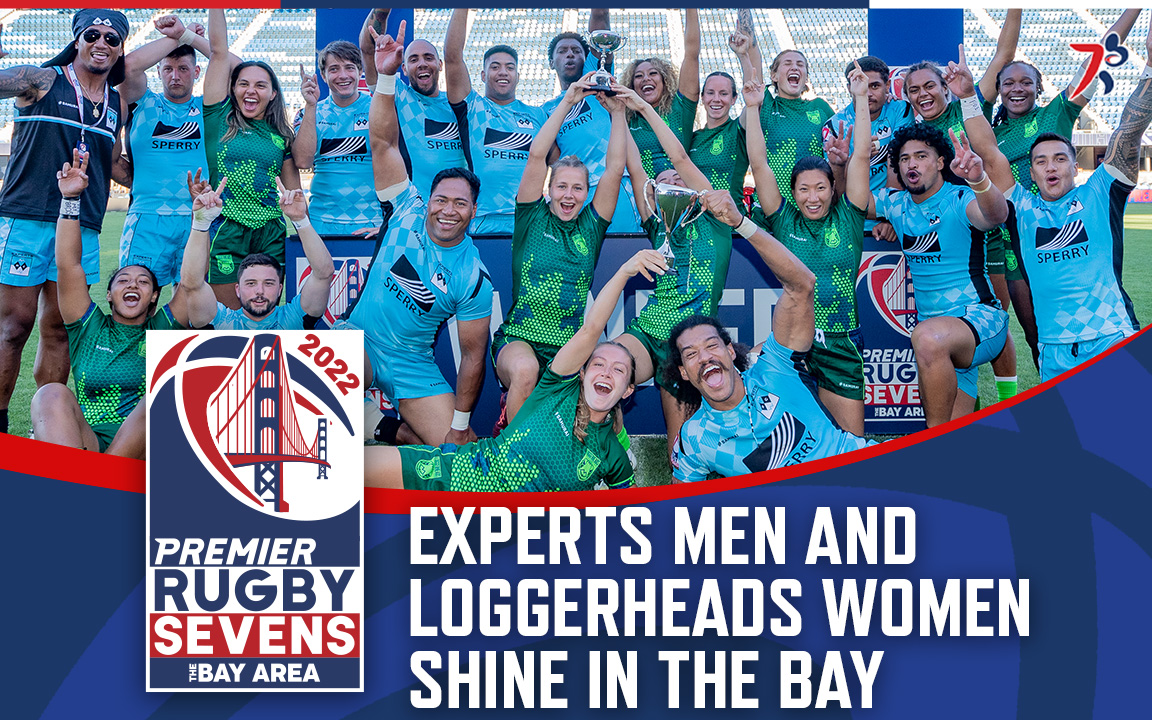 And just like that, we’re off to the races. The Expert men and Loggerhead women, powered by Rhinos Rugby, emerge from PayPal Park in San Jose, California as champions of the 2022 Premier Rugby Sevens season opener. The entire circus is being packed up, every human involved is flying across four time zones, and in a handful of days at D.C.’s Audi Field, the tents and peanuts will be unpacked and we’ll do it all over again.

In winning the Bay Area, the Expert men claim back-to-back titles, having won the Inaugural Championship in Memphis last October, and they did it with the reigning MVP, Logan Tago, sitting out the final injured. Their women falling in the final to the Loggerheads, the Experts sit atop the United Championship standings after round one.

Tournament winners are awarded 10 points, runners-up 6, third-place 3 and fourth 1. Coming out of San Jose, as a franchise (men + women combined), the Experts have 16 points, Loggerheads 11, Headliners 9 and the Loonies 4.

For the Loggerhead women, the Bay Area title is a reversal of a 1-3 record in Memphis. With the franchise being licensed by the Rhinos, there’s new management, new coaches, and a host of new players. Among the new arrivals is Sophie Pyrz, the only woman with two PR7s titles to her name having won with the Loonies in October. The former Penn State All-American was pivotal in the final, impressively reeling in and dotting down an offload from the Flying Dutchwoman Pleuni Kievit to help sink the Experts.

International talent is a good thing

PR7s’ player pool is predominantly American and Canadian. Some overseas players residing in the States filtered into the fall’s Inaugural Championship, but foriegn-based players were proactively identified, recruited and signed coming into the first full-fledged season, and the early returns from San Jose are a better competition.

Kievit stood above the rest, the engine driving the only team to emerge from the weekend unbeaten. The 25-year-old former captain of the Dutch national team, a complete player, proved to be a match-up nightmare for everyone in the competition; too quick for most, more skillful than most, and more physical than most in attack and defense. Put them all together, and you had an absolute star in the Bay on Saturday.

For the men, All Black Brady Rush was impressive, but maybe more promising for the league was that he wasn’t too impressive. There have been 23 World Rugby Sevens Series, the annual globetrotting competition between national teams. New Zealand has won 13 of them. Having not just one of the most promising young players from the best sevens national team in the world, but also the son of an All Black 7s legend and former coach Eric Rush, buys the league legitimacy.

Before October, the brightest pathway for a hopeful youngster to make the national team was practicing twice a week and playing amateur club ball. That’s what Aaaron Cummings’ predecessors did for decades, yearning to be found like a needle in a haystack. But Cummings, who came into PR7s last fall a lanky, mostly-unknown prop from Detroit, left Rush in the dust in the Final on Saturday.  It’s a little easier to catch the rugby world’s attention when you’re stiff-arming an All Black instead of Jake from State Farm.

The Future is Bright
What do Summer Harris-Jones, Alex Wantlin, Tala Talapusi and Naima Fuala’au have in common? They’re all contracted to the United States national team, but are rarely selected for international duty. That means we often don’t get to see them play, but they’re training every day right alongside the Olympians and household names. Turns out, it also means they’re really, really good.

Harris-Jones and Wantlin, are freshly out of Life University, while Talapusi and Fuala’au have been sitting in the green room longer than Aaron Rodgers on draft day. Both started training with the national team straight out of high school as teenagers. Fuala’au made his international debut during the 2016/2017 season, and he’s only netted one more World Series appearance since.

For the contracted players who miss selections from tournament to tournament, the lifestyle can be a grind with no payoff. Getting to lace it up against some of those people they’re battling for international playing time in a professional league can feel like an answered prayer.

Fuala’au was the best player on the best team Saturday, delivering silky smooth service all tournament and a second title for the Experts. Talapusi was outstanding for the Loonies, pairing with another young phenom, 18-year-old Kahunu Koi, forming maybe the most electric halfback combo in the competition.

Harris-Jones was a revelation, not just exhibiting speed, but making plays all over the park. When the defense paid too much attention to her, it freed up all sorts of space for Su Adegoke to do the damage. And Wantlin did it all for the Loonies, scoring from the base of the ruck, stealing the ball at the breakdown and coming up with clutch cover tackles.

Legend has it, the best basketball game ever played was a closed intrasquad scrimmage of the 1992 Dream Team. Teammates-turned-ruthless competitors. Instead of Michael Jordan and Larry Bird, the aforementioned up-and-comers had the opportunity to go full-bore against those starving them of playing time like Alena Olsen of the Headliners and Spiff Sedrick of the Loonies. Saturday’s performances from the depth of the national team stables erases any remaining doubt for Harris-Jones, Wantlin, Talapusi and Fuala’au.

With some of the league’s heavy hitters expected to pitch up at Audi Field, we’re going to see some of those training ground derbies up close and personal in D.C. Naya Tapper will be booting up for the Headliners, and the reigning champion Experts add the USA’s highest scoring player of all time, Madison Hughes.

Watching Hughes, starting halfback for the Eagles through the last two Olympics, parry the haymakers from the young pups hoping to inherit his jersey, will be a highlight. So will Tapper and Harris-Jones colliding on the wing.

Tickets are still available for The District Tournament at Audi Field on Saturday, July 16. https://prsevens.com/tickets/