CARLIN ISLES AND NAYA TAPPER TO HEADLINE THE HEADLINERS 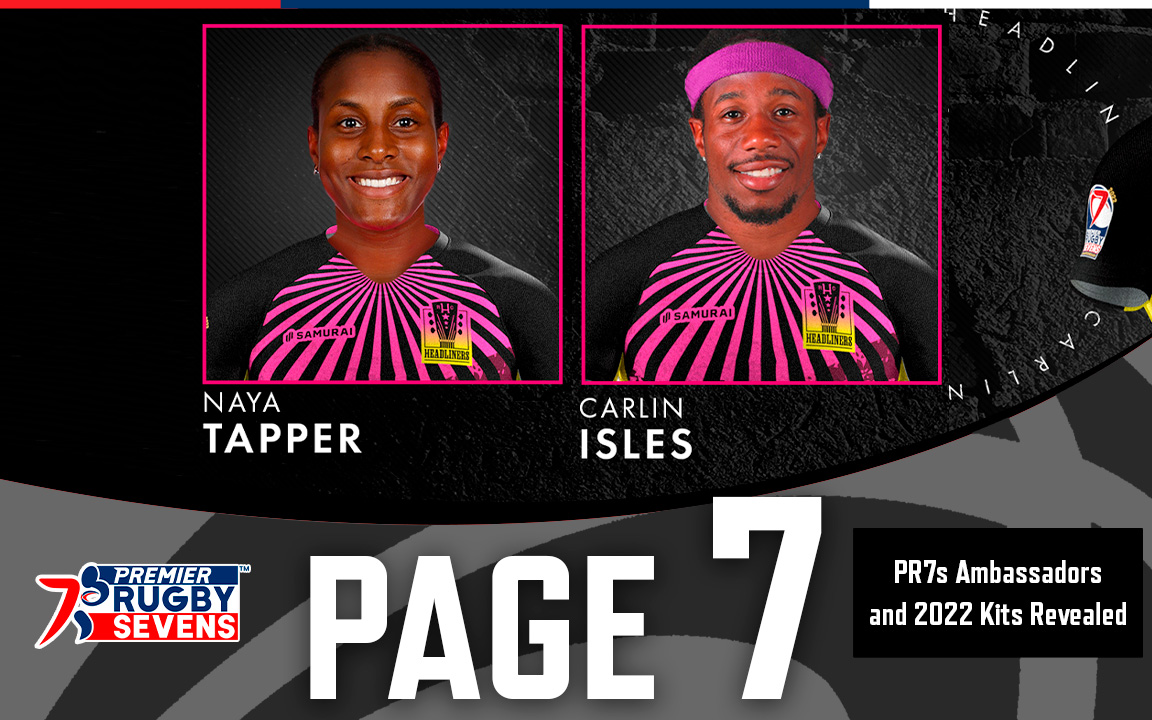 As the countdown to kickoff for Premier Rugby Sevens’ inaugural season enters the final stretch, team formation is well underway, and the stars are shining brightly, early. Between the USA’s all-time leading point scorer, Madison Hughes, signing last week, and each franchise’s ambassadors being unveiled this week, the first 13 players confirmed for the 2022 season include five Olympians, six Pan-American Games veterans and seven collegiate All-Americans.

All have played for the United States national team on the HSBC Sevens World Series, combining for 1,163 matches, 3,648 points, and 519 tries. While some of these stars are returning for their sophomore PR7s campaigns, having played in the Inaugural Championship last October at Memphis’ AutoZone Park, some will be making their debut in the world’s first professional 7s league next month.

The shiniest new name on the men’s side is Carlin Isles, the fastest man in rugby. He narrowly qualified for the 2012 Olympic Trials as a sprinter, having registered the 36th-fastest 100-meter-dash in America. As a longshot to actually make the team for the upcoming London games, Isles made a “Cool Runnings” style pivot to rugby, earning a national team call-up just a couple of months into the switch.

When Isles first burst onto the international rugby scene, his physical gifts were so extraordinary they overshadowed his lack of skill. He couldn’t pass and had no sense of how the game was supposed to be played, but his freakish speed captivated the rugby world, and the millions of views garnered by a viral highlight video launched him into a stratosphere of fame previously unvisited by an American rugby player.

In that video, you can hear former England and Barbarians scrumhalf turned legendary rugby journalist and the BBC’s longtime voice of rugby, Nigel Starmer-Smith, suggest Isles is likely the fastest rugby player of all time.

“I’ve never seen anyone quicker on a rugby field than that, 15 or 7s,” he said, calling one of Isles’ matches. “I don’t think anyone else has, either.”

Isles’ speed not only changed the sport’s profile in the United States, but the national team’s competitive trajectory, and the way every team in the world had to approach playing the USA.

“A year ago we were losing by 30-40 points to the top-tier teams. We are now beating all but one of those teams, and in those games they’re very, very close,” then-national team head coach Alex Magleby said in a profile of Isles produced by ESPN’s Grantland Channel.

“Carlin brought the world to USA Rugby, because everybody’s watching,” added assistant coach Andy Katoa, who coached Isles in his first-ever summer of rugby for the Gentlemen of Aspen. “Everywhere we go, people want to talk to him.”

The brightest new name on the women’s side is Abby Gustaitis, co-captain of the USA at the 2020 Olympics in Tokyo. She was in Memphis last fall as the off-the-field captain of the Loggerheads, unable to play due to a lingering wrist injury. Her anticipated on-field debut for PR7s this season would mark her first playing time since she was controversially cut from the national team in January.

This wasn’t her first time being cut from the Eagles, and if she leads her team to victory this summer, it won’t be her first redemption story. A high school basketball standout who picked up rugby at the University of Maryland, Gustaitis earned All-American honors as a senior. Two years after playing her first bit of 7s, she was called up to train full-time with the national team by head coach Ric Suggitt.

Her combination of size and athleticism made her a serious threat both in the kickoff and around the park, but she fell out of favor when Suggitt was let go in the preseason and replaced by Julie McCoy.

“I was there for a couple months, but I wasn’t making the team,” recalled Gustaitis in a podcast interview last August. “I was in the player pool but I wasn’t quite breaking in. She brought me in her office one Friday afternoon, and she was like, ‘You know Abby, I don’t think this is the sport for you. I don’t see you fitting into the team.’

“I was shocked. I hadn’t made the team under her yet, but I really felt like I could bring something to this team, was on the right path, I was growing as a player, had all the good things stacking up. So that hit me.”

Less than four months after her signing was announced and only five months before sevens’ debut at the Rio Olympics, Gustaitis packed her bags at the Olympics Training Center and moved back to Maryland. She took a few months away from the game, during which McCoy was jettisoned and the national team hired its third head coach in a calendar year in Richie Walker, now the head of scouting for PR7s.

Watching, from home, her old teammates take fifth in Rio served as fuel for Gustaitis to go all out for Tokyo 2020. That same summer she helped Scion claim a club 7s national championship, then the next year she played in the 15s World Cup. A couple of months later, Walker tabbed her for her World Series debut in Dubai. By the next summer, she was captaining the sevens national team at the 2018 Rugby World Cup Sevens in San Francisco.

“I didn’t make the 2016 team for Rio, but I came back and I fought my way back in it and I’m here,” she said while competing in Tokyo. “I just think you might not always stick with the path that you thought you were [on]. But as long as you’re doing it with everything you have, then just back yourself.”

Making his PR7s debut for the Loonies men this season is Marcus Tupuola, the dynamic, agile playmaker who can line up anywhere across the backline. The Southern California native broke into prominence as an All-American at Notre Dame College.

Headlining the cast of returners are Naya Tapper, Martin Iosefo and Logan Tago. Iosefo is the two-time Olympian who helped the Loggerheads to the final in Memphis, where they fell in overtime penalty kicks to Tago’s Experts. Iosefo announced his retirement from the sevens national team in December, signing off as the USA’s seventh all-time leading try scorer sixth in matches played.

In Memphis, Tapper got her Headliners to the final undefeated, where they fell to the Loonies, who they’d beaten earlier in the day on the back of a brace of tries from Tapper. Tapper’s four tries tied her for the title of women’s top try scorer. Since then, Tapper became the first American woman to score 100 tries on the World Series, surpassing Loonie rival-from-Memphis Alev Kelter to become the USA’s all-time try leader.

Scoring seven tries in his first-ever sevens tournament, including two bone-crunching scores in the final, Tago was named MVP of the Inaugural Championship. A former linebacker and defensive end at Washington State, he was recruited into rugby by his cousin when COVID derailed plans to play in the Canadian Football League. A few short months later, Tago made his sevens debut in Memphis, prompting national team head coach Mike Friday to immediately sign him. He’s since racked up 19 matches for the Eagles, scoring two tries on the international stage.

Also returning are Eagles Summer Harris-Jones, who will stay in Expert powder blue this season, and Alex “Spiff” Sedrick, who hopes to help the Loonies keep their perch atop the league.