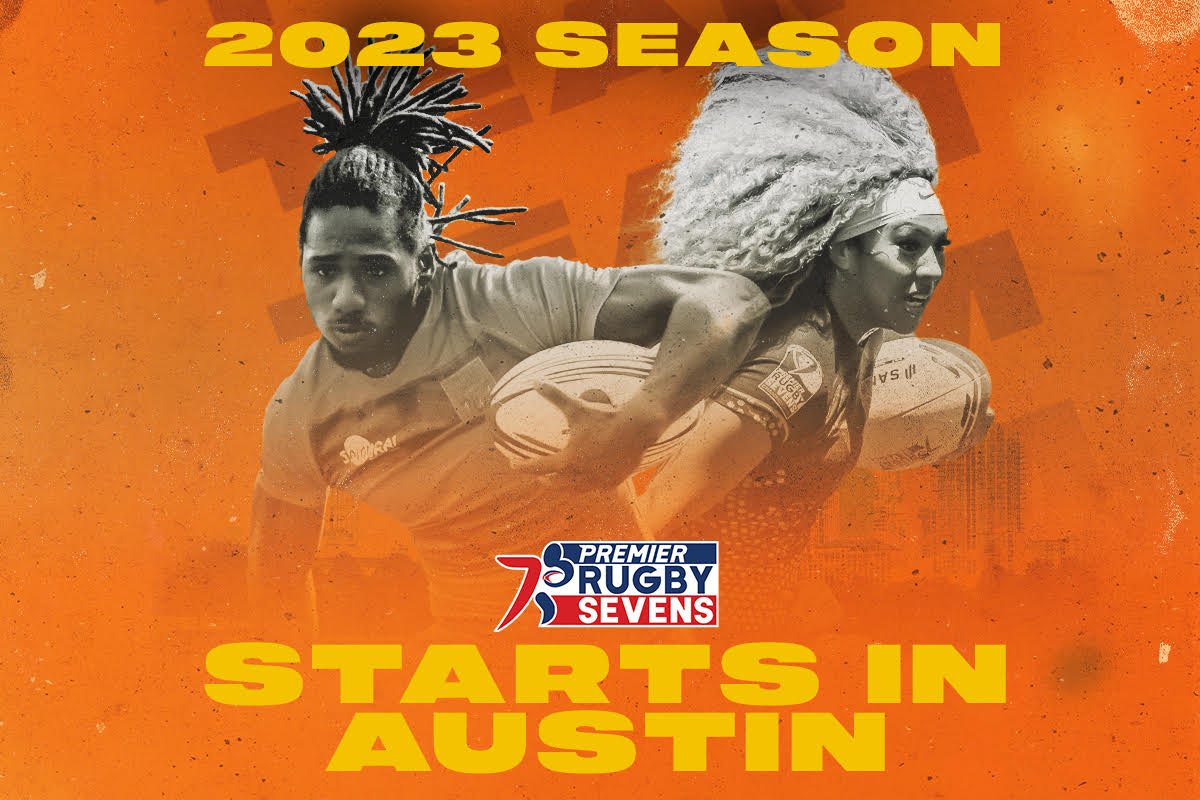 (AUSTIN, Jan. 10, 2023) Premier Rugby Sevens (PR7s), North America’s top-tier women’s and men’s rugby sevens competition, today announced the Texas Team will host the 2023 Eastern Conference Kickoff tournament, which will mark the start of the 2023 PR7s season. The festival-style event will take place at Q2 Stadium in Austin on Saturday, June 17. PR7s returns to the site of its 2022 Championship Weekend, which was the first non-soccer sporting event in the stadium. The Austin tournament is the first event to be announced for the 2023 season. The full PR7s schedule will take place in markets across the United States and will be confirmed in the coming weeks.

As a league, PR7s doubled in size this year with an elevated competition format. The Texas Team is one of eight franchises featuring men’s and women’s teams and will play in the league’s Eastern Conference, joining the New York Locals, Southern Headliners, and an expansion franchise from Western Pennsylvania. The top two teams from each conference will qualify for the 2023 Championship tournament.

As the first league of its kind with men’s and women’s teams competing under one umbrella with equal pay, each PR7s event will boast a party-like atmosphere with bands, DJs, games, contests, partner integration, and special appearances. Tickets for each event are available at PRSevens.com/tickets.

PR7s tournaments will include a series of eight 14-minute games, rotating between the men’s and women’s competitions on the same day. Each event will crown a men’s and women’s winner. The season-long competition will build towards the 2023 Championship Tournament, where one franchise will take home the 2023 PR7s United Championship – an unprecedented prize that combines the men’s and women’s results. Additionally, the last men’s team standing will take home the A. Jon Prusmack Cup, and the women’s prize is the Kathy Flores Cup, honoring two major pioneers in American rugby.

Before the season, each franchise will run PR7s Open Trials in their home markets to search for talent in their region. In search of the area’s top talent, Texas Team hosted its first Open Trials on Jan. 7, 2023. At Open Trials, franchises evaluate male and female athletes to compete to make a roster alongside Olympians and national team players. The local franchises will have the right of first refusal to draft these players in the upcoming expansion draft. The professional league offers pathways for players to have opportunities to also play internationally.

The following is the PR7s conference breakdown:

"We are very excited for the Texas Team to host the first official Home Tournament in PR7s history at Q2 Stadium,”  said Owen Scannell, CEO of Premier Rugby Sevens. “The Austin fans and community were incredible hosts for the 2022 Championship last year, and we could not wait to return. This year, the stakes are even higher, with every match counting towards a postseason berth. The Texas Team will be part of the growing sport of rugby throughout the Austin community all year, culminating in hosting on June 17.”

Last year, the PR7s 2022 season included over 30 matches through tournaments at the MLS stadiums in San Jose, Washington, D.C., and Austin. The Southern Headliners took home the first United Championship, led by Team USA Olympic co-captain Abby Gustaitis for the Headliners women and U.S. national team player Adam Channel on the men’s side. The Headliners also took home the Kathy Flores Cup for women’s top prize, while the SoCal Loggerheads earned the A. Jon Prusmack Cup as the men’s champion, led by U.S. Olympians Martin Iosefo and Matai Leuta.‍

Premier Rugby Sevens (PR7s) is a groundbreaking professional sports league in North America that debuted in 2021. With a focus on accessibility and entertaining content for fans, the league showcases the electrifying sport of rugby sevens through a touring format in cities across the United States. PR7s is the first sports organization of its kind, with men’s and women’s teams competing under one umbrella with equal pay. To learn more about Premier Rugby Sevens, go to PRSevens.com and follow the league on Twitter, Instagram, Facebook, and LinkedIn.‍

About the Austin Sports Commission‍