ALL TO PLAY FOR IN AUSTIN ON JULY 30 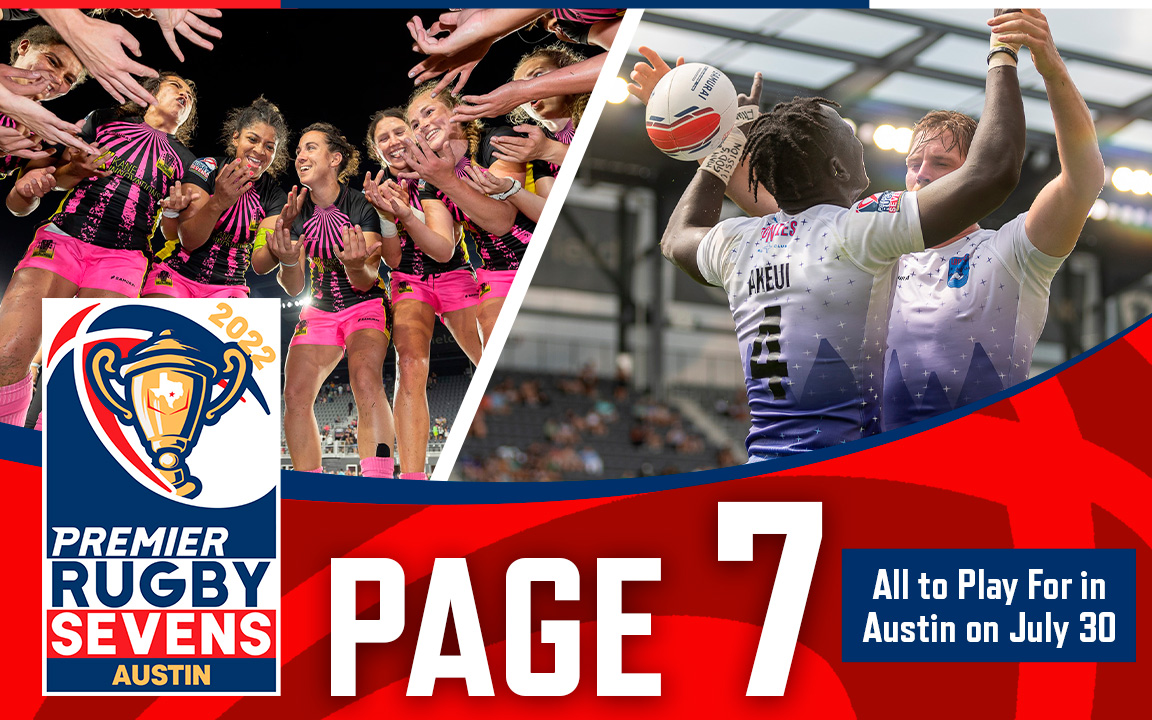 The Expert men lost the opening game of the season, 19-14 to the Loonies in San Jose, and have since reeled off five-straight wins, claiming both tournament titles this season. That makes three dating back to the Inaugural Championship in Memphis last October, when the Loonies women also lifted the trophy.

They haven’t won a game since, going 0-5 through San Jose and D.C. Next weekend in Austin, both the first-place Expert men and last-place Loonies women sit just two wins from back-to-back Premier Rugby 7s titles. Evidence of the beauty of PR7s, and 7s in general; that the result is so often in the balance until the final seconds.

Men’s Semifinals
On the men’s side, the Experts (5-1) face the Loggerheads (1-5) in a rematch of October’s final, won by the Experts in a penalty kick shootout. These teams have met just once since, the Experts winning 19-10 in D.C. The other men’s semifinal features the Headliners (3-3) and Loonies (3-3). Their only meeting so far this season was a 17-12 win by the Headliners in D.C.

Though the Experts have won every men’s PR7s tournament title to date and sit alone in first place, they lose five players from the D.C. title team, including tourney MVP Madison Hughes, Inaugural Championship MVP Logan Tago, star flyhalf Naima Fuala’au and Aaron Cummings, tied for second in the league in tries. The change in roster is mostly due to being called to international duty.

They could well have their hands full with the Loggerheads, who retain virtually everyone from the last weekend, including wing Derek Adams, whose four tries in D.C. tied the Loonies’ Faitala Talapusi for the tournament high. They also boast two of the league’s top-five tacklers in Dominick Iacovino and Brock Ian Gallagher, the former leading the entire competition in takedowns.

Experts fans have a lot to be excited about, though, in the acquisition of 15s and 7s Eagle Mikey Te’o. The 28-year-old playmaker is a unique combination of pace and power, with elite agility to boot. He will be an instant difference maker for the defending champs, and with multiple club national titles under his belt with Belmont Shore, provide a timely injection of championship pedigree.

Another big signing ahead of Austin is the Loonies’ pickup of Cristian Rodriguez, two-time national champion at Lindenwood and inaugural recipient of the Prusmack Award, college rugby’s version of the Heisman. He, like D’Montae Noble, who the Loonies added before D.C., is a sawed off playmaker with live feet. They’ll both have to help fill the void left by the league’s leading scorer, Talapusi, and fellow Eagle Macus Tupuola.

Talapusi, second in the league in tackles, has made a case for MVP of the season, and he’ll undoubtedly be missed. But the prospect of Kahunu Koi, Noble and Rodriguez, three Lilliputian livewires, playing next to one another is worth salivating over.

They’re anchored by the all-around play of Eagles Abby Gustaitis and Alena Olsen, but in D.C. it was rookie Emma Farnan stealing the headlines. She picked up rugby at Notre Dame while getting her PhD in Aerospace Engineering, and in D.C. she picked up the MVP honors, scoring back-to-back tries off the bench to seal the victory.

Luckily for the Experts, the Headliners will have to overcome the loss of Olsen’s quarterbacking and restart kicking in Austin. On the leaderboard in tries, tackles and clean breaks, her absence will be felt. And luckily for the Headliners, the Experts will be without Summer Harris-Jones, whose five tries have her tied for second in the league. Expect Su Adegoke, also tied for second in tries, to carry more of the load for the Experts in Austin.

After starting the season with four-straight wins, the Loggerheads have dropped back-to-back games to the Headliners. Nonetheless, they’ll be heavy favorites against the Loonies, who will be without Alex Wantlin and Spiff Sedrick in the semifinals, but with Amanda Hull for the first time since hoisting the trophy in Memphis.

Entering the final tournament, only one franchise is mathematically eliminated from the race for the United Championship, the Loonies. In D.C., weather forced the Loonies’ consolation match with the Experts to be canceled, so they tied for third place and banked two points each. The Loonies needed to leave The District with at least three to keep their franchise in the hunt.

The Experts lead the three-way race for the first-ever PR7s United Championship, nosing out the Headliners by just three points. This standings rivalry takes center stage in Austin’s second match, when the women duel for a shot at the final and the difference of 3-9 points in the overall standings.

Ten points back from first place are the Loggerheads, though if chalk holds and the women make it a clean sweep of the Loonies in the semifinals, that gap is instantly narrowed. And if the men upset the depleted Experts in their semifinal, all of a sudden the Loggerheads are within realistic striking distance of first place.

It all comes down to Austin.  Saturday, July 30. Q2 Stadium. Every game matters.