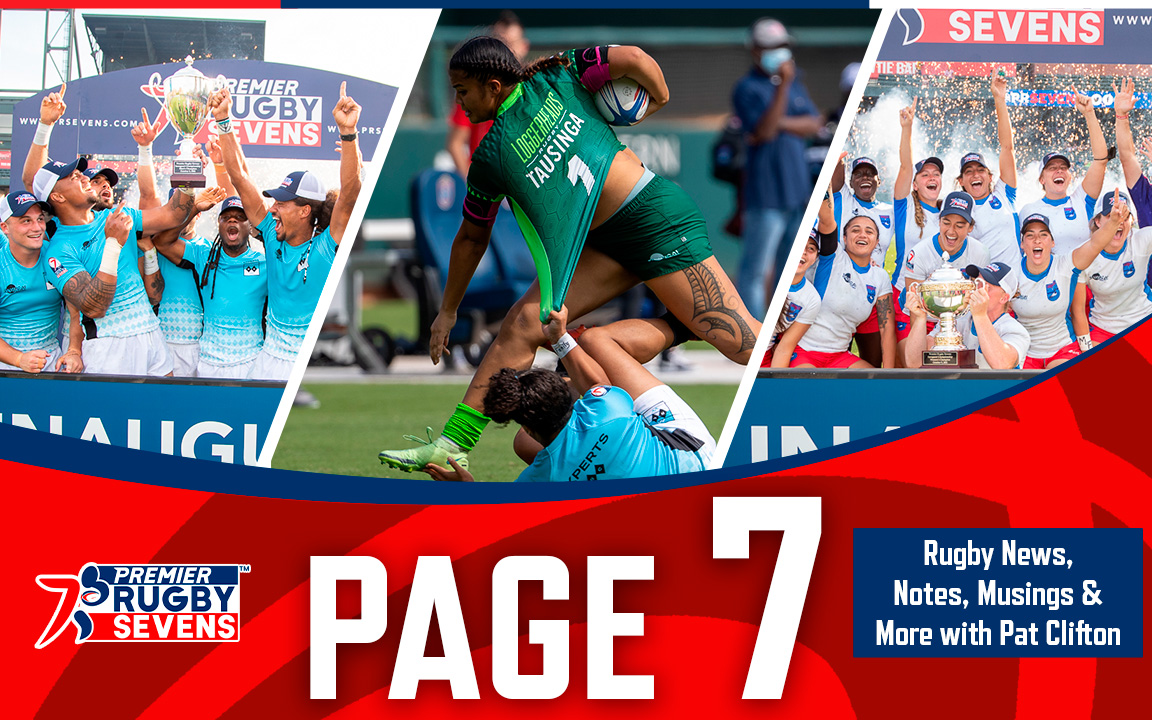 Digging into the details for July’s tournaments & championship

In the story of Premier Rugby Sevens’ inaugural season in 2022, the who, what, when and where are pretty well known. The world’s first pro sevens league, consisting of four men’s and four women’s teams receiving equal pay and treatment, will play three tournaments through four weekends in July at state-of-the-art stadiums spread across the world’s biggest sports market in San Jose, D.C. and Austin, respectively.

Players, as they did for PR7s’ inaugural championship in Memphis last October, will come from all over North America via myriad pathways — the American and Canadian national teams, professional 15s, the collegiate pipeline, crossover catchments and open trials on both coasts and north of the border that have been bursting with participants this offseason.

The why is something we’ll probably never stop tackling in this column, as it’s a big question. For starters, because sevens is the most electrifying sport on the planet, tailor made for the American audience, and the world is past due for a team sports league that puts women on a truly level platform with men in every aspect.

The how, though, remains a bit of a mystery. With you. And I’ve got some details on the upcoming season.

There are three championships on offer in 2022, those for men and women, and a unique PR7s creation, the United Championship.

The men’s and women’s competitions will be decided in a traditional season-to-championship format, with the first two events acting as the “regular season” and the finale serving as the championship. Results from the series-opener July 9 in San Jose will determine seeds for the second leg in D.C. July 16.

Together, the standings from those tournaments will determine the match-ups for the championship July 30 in Austin, where the top and bottom seeds will meet in one semifinal and the middle seeds in the other, followed by the finals, crowning the PR7s men’s and women’s champions.

The schedules for San Jose and D.C., the two “regular season” tournaments, if you will, mirror each other. Four-team competitions are split into two-team pools, with each team playing two pool matches; one against their pool rival, and one crossover match from an opponent from the other pool.

Using a point structure of 3 points for a win, 2 for a tie and 0 for a loss, and adopting from 15-a-side rugby the awarding of bonus points for scoring four tries or more in a match or losing by seven points or less, the winner of each pool will advance to the tournament final. The losers play for third place, giving every team three matches each in San Jose and D.C.

Ties are permitted during pool play, but not knockouts, and the first tiebreaker for pool supremacy is head-to-head results. At first glance, that would appear to make the in-pool matches determine the entire pool, except in the case of a draw. But the bonus points, totally new to sevens, give teams a buffer to avoid tiebreakers altogether.

Night rugby is the best rugby. The USA Sevens in Las Vegas, as a stop on the HSBC Sevens World Series, the annual globetrotting, intercontinental competition featuring national teams, served as the Super Bowl of American rugby for a decade. From 2010-2019, it was the largest rugby event in the United States, by every measure. Most attended, most teams participating, broadcast viewership, etc.

When it grew to three days, bucking the norm of the typical Saturday-Sunday format adopted by most World Series tournaments, the most exciting moment of each weekend was watching the USA take the field under the lights on Friday night. Something about pyro, a star-lit sky and the fastest sport on Earth makes for one intoxicating cocktail.

And you’ll get that at every PR7s stop. The San Jose and D.C. events will start in the late afternoon, local time, and run deep into the evening. Not only does that promise sevens after sun down each weekend, but means the event will span “prime time” across pretty much every time zone, coast-to-coast.

If rugby sevens is indeed the most exciting sport in the world, tailor made for an American audience, which indeed constitutes the world’s richest sports market, why hasn’t it penetrated the mainstream yet?

There’s a strong argument to be made it hasn’t been baked with the proper blend of old world ingredients and American flavors. The powers that be at PR7s have obviously been busy in the test kitchen working on a new recipe, and it looks delicious.

For starters, whistle to whistle, the game is exactly the same. Growing up a wrestler, you’d wrestle folkstyle with your school, and assume that was the only “real wrestling” there was, in stark contrast to the spandex-on-TV version. Then you’d watch the Olympics, hoping to find a new hero, and the Greco-Roman or freestyle wrestling on display would be completely unrecognizable.

The headline takeaway is that, with only two games to make your case and the introduction of bonus points, there is no margin for error. No lame ducks. Every match counts for everyone. You will no longer be subjected to a 2-0 team playing an 0-2 team in a meaningless pool game.

The addition of bonus points is a particularly sneaky touch. Typically in sevens, there are none, and losses are rewarded with one point (eww). That often leads to point differential as the tiebreaker, so by the end of pool play you need an abacus and scientific calculator after the final whistle to determine who won.

Bonus points for scoring a lot of points and losing by a small margin simplify it. Fans can see and cheer bonus points being scored in real time, where they don’t typically calculate point differential on the fly.

Another feature is directly tied to the United Championship. One of the hopes with this format is the creation of team-brand fans. Maybe you love Naya Tapper, so you decide to watch PR7s, and since she plays for the Headliners, you adopt them as your team.

You’re rabidly rooting for her and her team to do well in all their games, but you’re also following them in the United Championship standings week to week. That means, in order for Tapper to win all the trophies, you need the Headliner men to win, too, so you adopt them as your men’s team.

This is a journey PR7s is banking on fans taking, and if they do, they’ll be handsomely rewarded. Typically, at a major sevens event, you watch your team on the field for 14 minutes, and then you party for a handful of hours before watching them again.

You’re still gonna party at PR7s, but a lot closer to your seat. As fans of both the Loggerhead men and women, for example, will be rewarded with getting to watch their teams play twice every hour-and-a-half or so. You’re also three-times as likely to root for a team that hoists some kind of trophy at the end of the season.

The 2022 season promises more tournaments in pristine venues, more equity with totally balanced team brands, the fastest, most exciting sport on the planet packaged specifically for an American audience, and more chances to win a championship? What’s not to like?