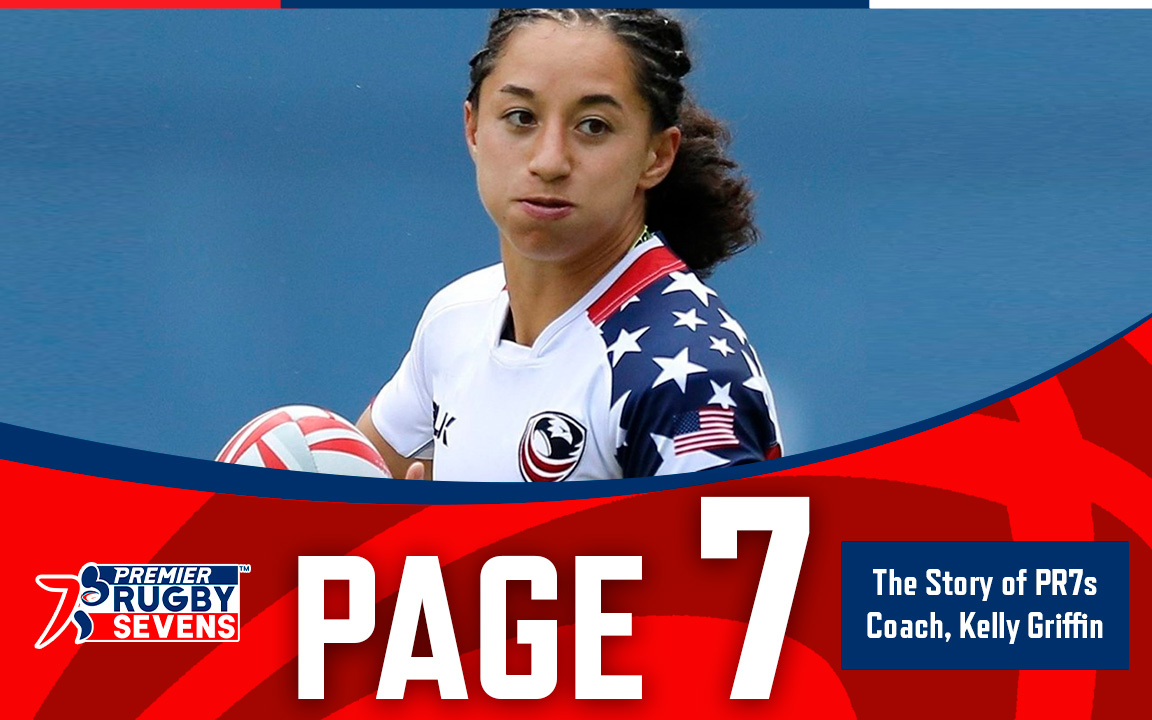 If you want to put into perspective where Premier Rugby 7s fits on the historical timeline of progress for women’s rugby, all you have to do is look at how far the game has come through the lens of Kelly Griffin’s career. Coaching the Loonies to the PR7s Inaugural Championship in Memphis last October, the Olympian claimed the first-ever title in the world’s first-ever professional 7s league and North America’s first-ever pro rugby competition of any kind for women.

For the 35-year-old, those are just her latest firsts. She was also one of eight women to earn USA Rugby’s first full-time contracts in 2012, she played on the first-ever Women’s Sevens World Series the following year, as well as in sevens’ Olympic debut in Rio 2016. She also won the first-ever title of the Women’s Premier League, the top competition of 15s rugby in America, with the Berkeley All Blues in 2009.

Before Griffin, women weren’t paid to play rugby, only men’s national teams had an annual worldwide tour, no gold medals were on offer, and there wasn’t even a national women’s competition in America. Griffin didn’t just watch as those gainlines were crossed, she literally carried the ball.

“‘Oh, did you always dream of playing rugby in the Olympics?’” Griffin says people ask. “I’m like, rugby wasn’t even in the Olympics until I’d been playing for five years.

A basketball player in high school, Griffin was introduced to rugby as an underclassman at UCLA in 2004. Even though the men’s game had professionalized nearly a decade earlier on the heels of the 1995 Rugby World Cup, when Griffin started playing, the women’s game the world over was still entirely amateur.

Then came the announcement in 2009 from the International Olympic Committee that rugby would join the Olympic program seven years later in Brazil. That announcement changed everything for the sport, especially women. Griffin, who was at an age-grade national team camp at the time, remembers the day well.

“I remember we had cell phones, but they weren’t smartphones. They were like, ‘don’t have your phones on you. Don’t let people text you. We’re going to announce it all as a team, and keep all of our phones away so we all find out at the same time if we got in or not,’” she recalled. “That makes me feel really old.”

Despite the fact that sevens was going in the Olympics, and she was literally in the process of trying to make the U.S. National Team, which claimed bronze at the Sevens World Cup that same year, young Griffin didn’t picture herself waving to the world at the opening ceremony, even though that’s exactly what she’d do.

“At that time it was like something where I was like, oh man, playing in the Olympics would be so cool, but the path wasn’t clear. I’d gone to these junior national camps, but there were so many people there that were all so talented. I did it because it was fun and I loved it.”

Shortly after that assembly, Ric Suggitt took over as the USA’s head coach. His first camp was a large one in Las Vegas at the USA 7s, designed to get a look at the larger playing pool. Griffin made her national team debut there, even if unofficially.

“It didn’t count as a cap because at that time there weren’t sanctioned tournaments for women where you could get caps, which was lame,” Griffin said.

She would have to wait almost two more years before the national team called again, inviting her to a camp leading into Dubai.

“I made that team, and at that time there was this rumor going around that there’s going to be eight professional women’s contracts. And I didn’t really pay attention to it, to be honest, because I was like there’s no way I’m going to get one of those,” recalled Griffin.

“And then we go to Dubai, and in the airport going home Ric is like, ‘I’m going to offer you one of those contracts, do you think you can move to Chula Vista in three weeks?’ I was like, what? And then I did.”

If a young Griffin were coming along today, she wouldn’t have to sit by the phone for two years between twice-a-week training sessions. She could play in PR7s against the Olympians in an effort to become one.

“Now there’s this whole other opportunity to play at a high level, to be in a professional environment, and develop your skills and have an opportunity to get seen by higher level national team staff,” Griffin said.

“When I was playing, it was all pay to play. For the WPL now, it still is pay-to-play. So to be able to have that professional environment, even if it’s just for those three weeks, is a huge game changer, because you would only get that if you got invited to one of those USA camps, and even those you had to pay for.

“So just to have an opportunity to push ourselves against other top-level athletes, to be in a professional environment and understand the demand and what that is, and also the higher pressure environments. There’s internal pressure, but you weren’t necessarily playing games in front of crowds and learning how that works and understanding how that changes things I think is the most exciting for the next generation.”

Though there’s little doubt Griffin could have laced up the boots and taken the field as a star player last October, she’s blazing trails from the sidelines now. If bagging the world’s first-ever women’s pro sevens title is any indication, she’ll achieve just as much as a coach as she did on the field.

Avoiding a sophomore slump won’t be a simple copy-and-paste job for Griffin and the Loonies, though, as PR7s’ expansion to a three-tournament series, among other significant changes to the competition, has made the mountain harder to climb.

“Especially in that short time period, we were like, we’re not going to improve your passing. We’re not going to teach you how to tackle,” said Griffin of her approach at the Inaugural Championship. “You all have these basic skills. Most important is getting you guys to play as a cohesive unit. For us that’s building some baseline trust, some baseline communication where you know how to talk to each other on the field that’s going to get the results we want.”

The Loonies’ commitment to team-centered communication extended well beyond the pitch. Named after the loon, a bird native to Canada, Alaska and the northern reaches of the continent, the Loonies, led by Alaskan native and Team USA superstar Alev Kelter, learned to contort their hands into just the right shape and force air through their pursed lips just well enough to make a loon call.

The team’s connection to both one another and their beloved bird lives on in the team WhatsApp. “Anytime anyone sees a Loon out in the wild, that gets sent and there’s some chatter,” joked Griffin.

“It is exciting to have more tournaments and more time together as a team so we can build more, implement more. I think we created a really good foundation of team culture and now with more time and the basis create more of a team presence on the field as well. And with a bigger team of 18, it will be a new challenge to figure out what combination of people will be best for each event, too. And then there’s the draft!”